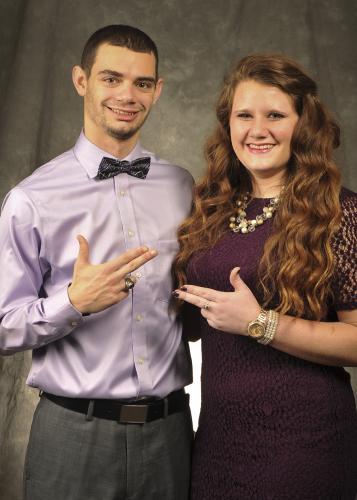 
NACOGDOCHES, Texas - The Stephen F. Austin State University Alumni Association announced that Collin Rutherford of Celina, Texas, and Olivia Miller of Arlington, Texas, have been selected as recipients of the 2016 Mr. and Miss SFA Award.

The Mr. SFA Award was established in honor of the late Stan McKewen, a 1934 SFA graduate. The Arnodean Covin Miss SFA Award honors the alumna who was named Miss SFA in 1940, 1941 and 1942.

A 2011 graduate of Celina High School, Rutherford, who received the Stan McKewen Mr. SFA Award, is a senior kinesiology major and the son of Mark and Wendi Roundy.

"Becoming involved in university-centered activities early on at SFA made me fall in love with the school, and I have been bleeding purple ever since," Rutherford said.

Rutherford's accolades include earning the Residence Life Leadership Award in 2012, Student Spotlight in 2014, sophomore Homecoming Duke in 2013 and Who's Who Among National College Students in 2014.

"Collin is the true definition of what a Lumberjack should be, as he carries the traits of The SFA Way," said Solomon Delaney, former SFA orientation supervisor.

Miller, recipient of the Arnodean Covin Miss SFA Award, is a 2012 graduate of Arlington James Bowie High School. She is a senior English secondary education major and the daughter of Mike and Lauri Miller.

Since eighth grade, Miller knew she wanted to become a Lumberjack. Many of her family members are SFA alumni, including an aunt who was Miss SFA in 1985. Altogether, Miller has eight relatives with SFA degrees. Her younger sister also is planning to be an SFA alumna when she graduates from the university in 2020.

"SFA has become my life, family and identity," Miller said. "Bleeding purple has taken on a fierce and unabated intensity, fueling a determination to experience as much Lumberjack life as possible."

"Olivia is one of the most enthusiastic, committed, conscientious members of the SFA community I have ever met," said Dr. Tim Clipson, SFA 101 coordinator and business leadership professor.

SFA's Alumni Association awards the Mr. and Miss SFA titles annually to exemplary students who well represent and promote the university. Recipients are selected based on their scholarship, participation and leadership in academic and co-curricular activities, and citizenship, service and loyalty to the university. A committee of faculty and staff members, community leaders and alumni makes the selections.