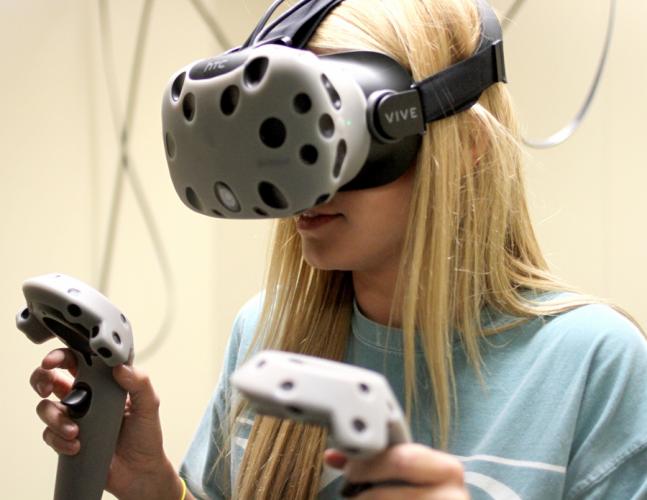 
NACOGDOCHES, Texas — Slipping on HTC Vive goggles, Stephen F. Austin State University senior Alexandra Caballero is immediately transported hundreds of leagues under the sea. Without flippers or the typical wetsuit associated with scuba diving, Caballero stands on a wooden sunken ship at the bottom of the ocean. A tiny, silver fish swims up to her mask, and to her right, a school of manta rays zips past. Without warning, a massive figure approaches — a 32,000-pound, 67-feet-long sperm whale.

“It blew my mind. I couldn’t believe how real it was or how immersed I felt,” said Caballero, an Austin early childhood through sixth grade education major. “It was the most incredible feeling. I don’t think an amusement park could have given me that thrill.”

Recently, Dr. Lauren Burrow, assistant professor in SFA’s James I. Perkins College of Education’s Department of Elementary Education, took her class on a virtual field trip in the Steen Library on campus.

“We are trying to create an ecosystem with this new technology,” said Edward Iglesias, web services librarian who has been instrumental in operating the new facility.

Although the lab is still under construction and won’t officially open until the spring semester, students and faculty and staff members may preview the lab by contacting Iglesias. The lab will feature four stations that provide a seated virtual- reality experience using Oculus Rift. Currently, the lab has two virtual-reality rooms where users move about using HTC Vive goggles.

Burrow took advantage of the opportunity to preview the lab and brought students enrolled in her social studies methods course to sample the technology.

“One of the pedagogies we learned about was field trips, so I wanted to take my students on a field trip,” Burrow said.

Students each had three minutes to dive in to a simulation that brought them under the sea and to coral reefs. They read about the Great Barrier Reef and worked through reflection prompts.

“We now have the capabilities as teachers in the 21st century to take field trips to places we never would have imagined,” Burrow said. “This technology opens so many doors for students.”

Burrow hopes this assignment encouraged her students to “think outside the box” and exposed them to ideas they can use in their future classrooms.