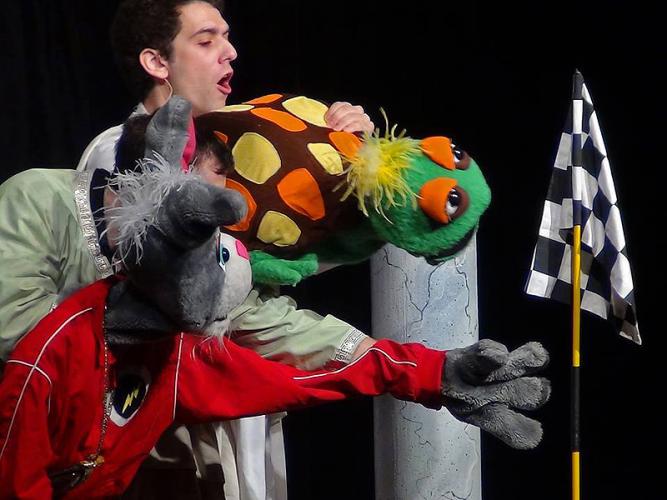 SFA theatre alumnus Nick Pinelli completed internships at Texas Shakespeare Festival in Kilgore and Texas Nonprofit Theatres Inc. in Fort Worth. He would later secure positions with Shakespeare Theatre of New Jersey and Madcap Puppet Theatre, a troupe in Cincinnati.


NACOGDOCHES, Texas - Internships provide valuable experience in any chosen career. But completing an internship can also be a deciding factor for a recent college graduate looking to land that big first job.

For fine arts students majoring in various areas of art and theatre at Stephen F. Austin State University, internships often take them to big cities in far-away places and open the doors to exciting experiences.

Many students earning a Bachelor of Fine Arts in the SFA School of Theatre will complete, for credit, either a year of study abroad at Rose Bruford College in London, England, or a yearlong internship with a professional regional theatre company. Some may spend a summer in an internship with a professional theatre company such as the Texas Shakespeare Festival or Portland Stage Company in Maine. Others start their careers as interns after graduation.

"Our study-abroad partnership with Rose Bruford College fulfills the same requirement as a internship in the BFA program, but I wouldn't characterize it as an internship," explained Scott Shattuck, director of the School of Theatre. "Students enroll in a different course and get in-class instruction, albeit in a conservatory setting that is quite different from our approach here at SFA."

Theatre major Gary "Chipper" Morris of Grand Prairie is completing a summer educational internship in the Education Department of Portland Stage that runs through Aug. 18. He will begin a seasonal internship there in early September that runs through May 18. Morris is working as a teacher this summer at camps based around books such as the Harry Potter, Percy Jackson and Boo series. He pieces together monologues and scenes that campers bring to life.

"It's really cool that I have a job that allows me to show kids how theater can be used to bring any story to life, even popular books that I was fortunate enough to read when I was a kid," Morris said. "I really don't think there's anything better than seeing all these kids having an unforgettable experience while knowing I was able to help make it so."

In the fall and spring, Morris will be involved in Portland Stage's public school outreach program and weekend theatrical camps for children.

"Portland Stage also does a wonderful job of allowing its interns to get work experience in just about every department, which could be anything, ranging from lighting to costuming to stage management, etc.," he said. "Some interns even get some acting opportunities on mainstage productions."

The School of Theatre has a close relationship with Kilgore's Texas Shakespeare Festival because Shattuck and Angela Bacarisse, professor of theatre at SFA, have worked there frequently in the past. Other longstanding partnerships for BFA internships are with Dallas Children's Theater, a professional company that produces high-quality plays for young audiences both in Dallas and on national tours, and Arizona Theatre Company, that state's largest non-profit professional resident theatre company, which performs in both Tucson and Phoenix. SFA theatre students have also worked with Theatre Three in Dallas. SFA theatre alumna Kat Edwards completed her BFA internship at Theatre Three. She now supervises the company's internship program as their company manager. SFA senior theatre major Taylor Dobbs of Baytown is working this summer with "The Lost Colony," an outdoor symphonic drama produced by the Roanoke Island Historical Association at Manteo's Waterside Theatre on North Carolina's Outer Banks. As an undergraduate, SFA alumnus Nick Pinelli completed internships at TSF and Texas Nonprofit Theatres Inc. in Fort Worth. He would later secure positions with Shakespeare Theatre of New Jersey and Madcap Puppet Theatre, a troupe in Cincinnati.

Palestine senior Greg Albright's internship with Porchlight in Chicago begins in mid-August and continues to mid-May. He will primarily be doing office work, but he will also have opportunities during the company's mainstage season in a variety of areas, such as stage management, sound design and props.

"The internship is all-encompassing," he said. "It allows me to dabble in anything and everything I want to experience."

His transition to Chicago began with a lot of online research, identifying the company's office space and performance venue locations, his apartment options in safe and affordable locations, and best ways to navigate the city. Because it is not a paid internship, it was critical that Albright calculate rent, food and transportation costs and other expenses far in advance so that he could budget adequately. Recent SFA graduates Mary Collie and Sarah Wisterman, along with other School of Theatre alumni, are based in Chicago and are available to advise him, Albright said.

Internship benefits are many, the greatest of which is probably the networking opportunities, according to Shattuck.

"Students form relationships with peers and arts professionals that allow them to develop professional networks in a very competitive field," he said. "They also put 'soft-skills' such as teamwork, problem-solving and communication to the test in a way that often allows them to develop even more rapidly than they do in our production processes on campus."

Central Heights senior Kathleen Easterling was an intern in the costume shop at Texas Shakespeare Festival last summer and was rehired this summer, mainly as a stitcher and dresser during performances, working daily from 9 a.m. to 10:30 p.m. with short lunch and dinner breaks.

"By working at TSF last summer, I was able to establish a reputation for myself and be rehired this summer," Easterling said. "I made so many connections with people all over the country last year and this year. I was able to work with highly experienced designers and learn many different techniques from my coworkers. I loved being able to meet people from all over the country and to experience different cultures."

Additionally, students can learn information, vocabulary and skills that they don't get on campus because they are working with different equipment, people with different backgrounds, and different material than they were exposed to on campus, Shattuck explained.

"We work hard to make their experience here at SFA as varied as we can, but they'll always encounter new things in the 'real world,'" he said.

"Not only did I improve my craft by working with TSF, but I made so many life-long friends," Easterling said. "The connections you make with your coworkers and the community of Kilgore are so amazing. I met so many kind and wonderful people here at TSF. I would not trade my experiences here for anything."

Several SFA design students in the School of Art have found internships closer to home, and some are on campus. Student graphic artists are working this summer with SFA Athletics, Campus Recreation and the College of Fine Arts. One student is interning with Tyler Today Magazine, two others recently secured internships with a Henderson sign company, and other student designers are interning at the Naranjo Museum in Lufkin.