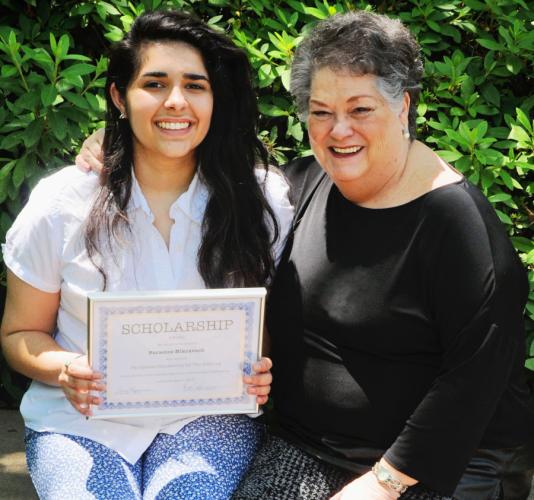 "Being the recipient of this scholarship is really cool because I'm glad they're helping with my college expenses of course. But on a deeper level, I'm grateful to have someone like Pat Spence supporting me," said Nikravesh, staff writer for The Pine Log. "She is a legend at The Pine Log, and I just can't wait to get back to the paper and make her and the people who helped her set up the scholarship proud. They're helping fulfill my dream, and I'm so appreciative."

The Pat Spence Scholarship for The Pine Log was established in 2014, and the first recipient was announced this spring. Money for the scholarship was raised by friends, former students and advisees of Spence, who served as director from 1986-2014.

"Parastoo was selected for the scholarship from among many promising SFA student journalists," said Amy Roquemore, SFA director of student publications and divisional media. "Her application stood out for many reasons, including her high academic achievement, her strong commitment to a career in journalism and, in particular, her compelling essay in which she wrote eloquently about her dreams of becoming a professional journalist and serving as a voice for those who do not have one."

Nikravesh joined The Pine Log staff in 2015 and "quickly became an asset to the student publication," Roquemore added. "She regularly contributes news stories and columns, and her journalism skills have continued to develop week after week. She is already a very good writer, and I expect her to become more proficient as she continues her SFA education and her work on The Pine Log."

A group of donors, supporters, former students, family, friends and colleagues surprised Spence with a dinner in her honor and the scholarship reveal on campus in August 2014. The scholarship was endowed in December 2014.

"I am so excited that we are able to award the first Pine Log scholarship to a young woman who has proven her dedication to SFA's student-produced newspaper," Spence said. "Although I have not had the pleasure of working with Parastoo directly, her passion for writing and for her campus newspaper is evident in the recommendations from those who have.

"This scholarship is so special to me," Spence added. "It stands as a testament to many Lumberjacks whose careers and lives have been shaped by their collegiate experiences in student publications and at The Pine Log. They have made this happen, and I am so grateful for their love and support of this scholarship. They are truly paying it forward."

Donations can be made at any time to the Pat Spence Scholarship for The Pine Log by contacting the SFA Alumni Association at (936) 468-3407 or alumni@sfasu.edu.