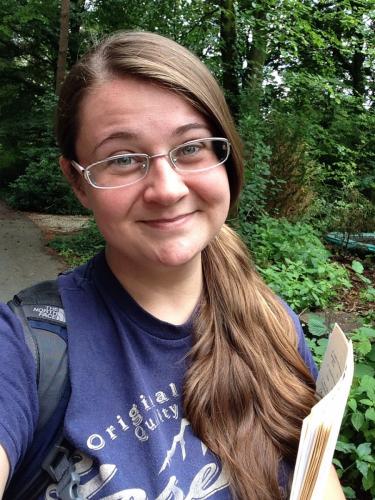 In 2015, SFA graduate student Amy Brennan conducted the first large-scale survey of citizens regarding public perceptions and opinions of wildfires in the Netherlands. Her results, which indicate citizens are aware of the growing threat of wildland fires in the country but are unprepared for such events, will provide Dutch agencies with valuable data to help guide public outreach and education. Pictured, Brennan holds surveys to be distributed during her time in the Netherlands. Photo courtesy of Amy Brennan


In a country comprising land predominantly situated at or below sea level, the threat of large-scale wildland fires has, for centuries, been viewed as an unfamiliar concept. However, a changing climate and increase in temperatures has caused this once-distant notion to rise to the forefront of management concerns for public safety agencies across the Netherlands.

Since 2012, Dr. Brian Oswald, the Joe C. Denman Distinguished Professor of fire ecology at Stephen F. Austin State University, along with students enrolled in SFA’s Arthur Temple College of Forestry and Agriculture, have collaborated with public safety agencies in the Netherlands to collect fire fuel load data and equip the country with the first quantitatively based wildland fire risk assessment. Though imperative, ecological data is only one component of the complex field of wildland fire management. Understanding the knowledge, concerns and perceptions of the citizenry who may face such a threat is crucial to the implementation of fire management practices.

To obtain this information, SFA forestry graduate student Amy Brennan, under the direction of Oswald, distributed and analyzed more than 500 public surveys in the forested Veluwe Region of the Netherlands to provide Dutch agencies with data quantifying public perceptions and opinions of wildfires.

“Social science research focused on wildfires shows it is important to engage local communities in anything regarding risk management,” Brennan said. “This large-scale survey is the first of its kind to be distributed in the country, and we want to understand the base level of knowledge that the citizens have regarding wildland fires.”

Brennan admits that developing a survey to collect such information was no easy task. She and her graduate committee developed and subsequently rejected more than two-dozen different drafts before adopting the final version. Following approval of the final survey, each question was meticulously translated from English to the Dutch language.

“We had to keep in mind that each word used may not have the same meaning to the Dutch as is does to Americans,” Brennan said.

For instance, Brennan said the term “nature” was of particular concern because of the nuanced differences between the two cultures.

“Most Americans tend to think of nature as a wilderness area or a large expanse of land,” she explained. “In the Netherlands, they don’t really have that. We learned from our time there that they typically refer to nature as any outdoor space.”

To ensure the survey translations were correct, Brennan called on the expertise of fellow SFA student and Dutch speaker Ellart Vreugdenhil, as well as agency contacts in the Netherlands.

Brennan said the results of the surveys indicate that much needs to be done in the coming years to educate residents on wildfires, as well as wildfire preparedness.

“Although 74 percent of those surveyed believe wildfires are a threat to the residents of the Veluwe Region, only 7 percent indicated they were prepared for such an event,” Brennan said.

Despite the lack of preparedness, respondents showed a desire to engage with government agencies to help increase their knowledge.

“They support the agencies in their attempts to protect them from wildfire,” Brennan said. “The fact that they’re supportive of management is a good thing because it gives agencies an opportunity to meet those expectations.”

In her final recommendations, Brennan encouraged the creation of locally organized community groups that partner with a key agency responsible for fire management or public safety. She explained these groups can be modeled after existing civic groups that contribute to water management in the country.

Additionally, Brennan believes research needs to be done to determine if and where fire management techniques, such as prescribed burning, can be used in the country.

“Prescribed burning has shown to be a useful tool to help control wildland fires in the U.S. and other countries,” she said. “I believe it is worthwhile to look into if it would be appropriate in their different ecosystems.”

Oswald will present Brennan’s research at the upcoming International Congress on Prescribed Fires held in Barcelona, Spain. There also is potential for Brennan’s survey to be used as a model for future research conducted in regions of Europe where wildland fires are becoming an increasing issue.

For information regarding this and other research occurring within SFA’s Arthur Temple College of Forestry and Agriculture, visit atcofa.sfasu.edu.