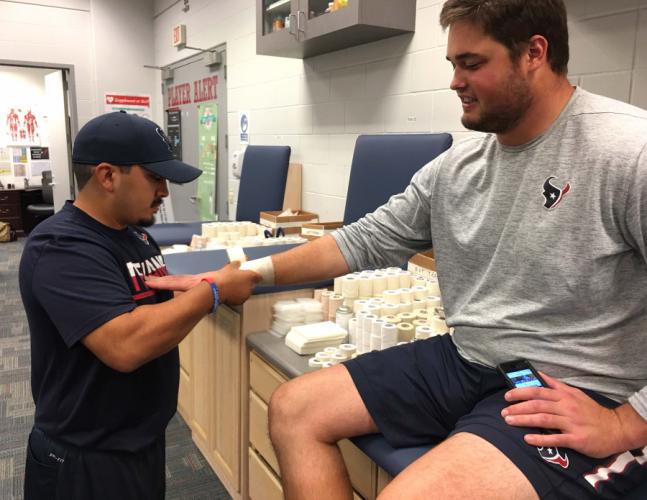 Jeffrey Rodriguez, a Stephen F. Austin State University athletic training graduate student and intern, tapes the wrist of an offensive lineman for the NFL’s Houston Texans. Rodriguez, an Austin native, is one of only five U.S. students selected to participate in the summer internship with the Houston Texans.


NACOGDOCHES, Texas — Discipline is the name of the game for Stephen F. Austin State University graduate student Jeffrey Rodriguez, who, since mid-July, has been interning as an athletic trainer with NFL team the Houston Texans.

Rodriguez, an Austin native who is a second-year graduate student in SFA’s athletic training program, is one of five U.S. students selected for the summer internship.

“Learning the Houston Texans were offering me a summer internship was one of the most gratifying moments in my life,” Rodriguez said. “This is such a memorable and unforgettable start to my final year as an SFA Lumberjack, and I couldn’t be more thankful for this once-in-a-lifetime experience.”

By 4:30 a.m. on most days, Rodriguez is at NRG Stadium in Houston preparing the athletic training facility by making dozens of ice bags, filling water bottles, prepping therapeutic modality units, stocking tape, organizing rehabilitation equipment, and ensuring treatment tables are cleaned and ready for the athletes. Rodriguez said after the athletes start arriving about 6 a.m., the energy really starts to pick up.

“During this time, we become more hands on with the players by helping them get warm and stretch, providing their treatments, assisting them through rehabilitation exercises and taping before practice,” Rodriguez said. “I have been able to shadow staff members and observe many rehabilitative exercises that I have never been exposed to before.”

At 8:25 a.m., everyone is on the field. Rodriguez helps keep the players hydrated during practice, and around 11:30 a.m., he begins assisting with treatments. Until 7:30 p.m., Rodriguez and the other interns are working in the athletic training facility. Most days don’t end for Rodriquez until about 10 p.m., but he explained the early mornings and late nights have taught him discipline.

“I have gained so much valuable knowledge from this internship that will help me as I return to SFA to work with the Lumberjack football team this fall,” Rodriguez said. “The preparation and attention to detail the Texans’ staff members have demonstrated is something I will take with me and apply in all aspects of athletic training.”

Rodriguez added his stay in Houston has helped him apply what he has learned in the classroom and clinical setting to the real world. He is currently serving as president of the Organization of Athletic Training Students at SFA and is the 2016 recipient of the Sandy Miller Student Leadership award, which is presented annually to an athletic training student at SFA who demonstrates outstanding leadership qualities. He also was recently awarded a scholarship from the Professional Football Athletic Trainers Society. After graduation, he plans to pursue a season-long position with a NFL team.