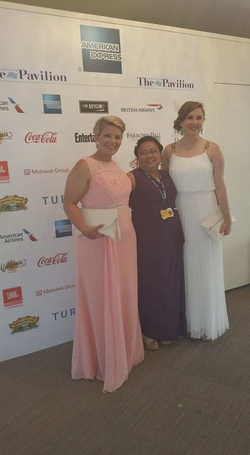 In May, Powers, of Cedar Park, Texas, and Smith, of Thicket, Texas, joined an elite group of students at the American Pavilion as interns in the Cannes International Film Festival Culinary Program.

As members of the culinary program, Powers and Smith prepared food in the American Pavilion, which is comprised of a kitchen, restaurant, coffee bar and conference area.

"It was a lot of fun and busy most of the time," Powers said. "The highlight of working the festival was the friendships I made with the other culinary and hospitality team members."

From hamburgers and hotdogs to curry lamb chops and chocolate cups filled with mousse, Powers and Smith prepared a variety of meals throughout the festival, learning different techniques with each dish. Powers recalls learning how to make fresh-stuffed artichokes.

Causin, who was instrumental in creating the American Pavilion event/hospitality management internship at the festival, served as a faculty adviser while in Cannes. She also participated in a roundtable discussion where she spoke about accessibility to events for individuals with mobility and visual disabilities.

"Working at the American Pavilion taught our students to be very meticulous, how to multitask and how to handle high-pressure situations," Causin said. "Students also learned how to act professional around VlPs, dignitaries and celebrities."

Hundreds of filmmakers, producers, and American and international celebrities attended the festival. In fact, Powers said she not only saw celebrities such as Blake Lively, Kristen Stewart, Jesse Eisenberg and Woody Allen, but also prepared them food platters.

When the students were not working the festival, they traveled to Cannes and other areas, including Èze, Paris, Monte Carlo, Saint Paul de Vence, Iles des Lérins and Italy.

"These experiences give our students inspiration for the future," Causin said. "They provide students with a different perspective, both personally and professionally."

Powers agrees this experience helped broaden her horizons and network.

"Overall, the experience taught me how fun it is to travel and to meet new people. I was able to see other students' skills and styles in the kitchen and make new friends," Powers said. "It was an absolutely amazing experience, and I would strongly recommend the festival to anyone interested in culinary, hospitality, business or film."