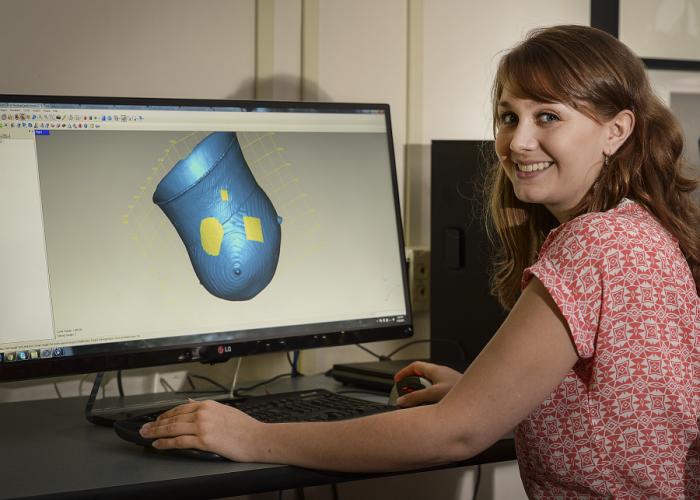 Stephen F. Austin State University history graduate student Amanda Carr of Pollok works with a digitized representation of a Caddo vessel in an SFA Center for Regional Heritage Research office. Carr's work with the center led to her selection for an eight-week internship at the National Center for Preservation Technology and Training in Natchitoches writing a how-to guide for 3D scanners.


NACOGDOCHES, Texas - A bright turquoise shape on a monitor is clicked and dragged left to right then vertically and horizontally so the details on each of its sides can be scrutinized.

Pointing to the computer screen, Stephen F. Austin State University history graduate student Amanda Carr of Pollok notes the bright yellow patches on the artifact's surface. Those indicate areas on the object, she explained, the complex 3D scanners housed in the Center for Regional Heritage Research on the SFA campus did not pick up.

"You can zoom in and out, manipulate and study it," Carr said of the digitized Caddo vessel while seated in one of the CRHR's offices.

Carr has learned much about 3D scanning since spending the spring semester working for CRHR staff members scanning artifacts found during archaeological digs.

"She has been learning how to use the 3D scanners, post-processing software (Geomagic Design X, Control and Studio) and Overleaf, an online platform for scientific writing," said Dr. Robert Z. Selden Jr., CRHR research associate. "We had an opportunity to test a few of the scanners, and she helped us to assemble a white paper that illustrates how to use the Konica Minolta scanner."

Taught in part by center employees and the remainder through trial and error, Carr's work with the CRHR led to her selection for a unique eight-week internship with the National Center for Preservation Technology and Training - a unit of the National Park Service headquartered in Natchitoches.

"I'm excited to live and work in Natchitoches because it's an old, charming town, and I get to use incredibly sophisticated technology that I didn't know anything about just a few months ago," Carr said. "It's nice to be on the science/engineering end of the liberal arts field, so it's forcing me to grow and get out of my comfort zone."

During the course of the two-month internship, Carr is writing what is known as a "white paper," she explained, that will be kept and utilized by the NCPTT.

"It's basically a how-to guide for the 3D scanning equipment," she added. "Once the guide is complete, NCPTT staff will use it to process a Native American basket collection. About 300 pieces were donated to the Williamson Museum on the Northwestern State University campus last year.

"The collection represents a wide variety of Native American craftsmanship, so NCPTT is wanting to 3D scan or digitize all of these and, in the end, make a virtual, online exhibition that is available to the public. Then, we will have a digital record of these objects that will eventually perish."

Several complex 3D scanners have been made available to SFA for purchase through collaboration between the center and SFA's Office of Research and Sponsored Programs. In turn, the opportunity for SFA students like Carr to work with state-of-the-art equipment led to her selection by NCPTT.

"I think that it's a great opportunity for Amanda to extend her professional network while learning about the various technologies and applications that are used in preserving material culture," Selden said of Carr's NCPTT internship. "It also will give her a chance to see how those preservation/conservation treatments are tested in the laboratory."

Carr is nearing the halfway point of her two-month internship. Her role has evolved during the first month to include additional laboratory duties. She is now using pXRF, or portable X-ray fluorescence, technology to scan the elemental content of 18th-century musket balls found at the Los Adaes State Historic Site, located approximately 14 miles west of Natchitoches. The ratio of lead, tin and other metallic elements within the musket balls helps determine if they are of Spanish, French, British or another origin.

Additionally, Carr will use a profilometer to scan lead seals unearthed at the site. The seals were wrapped around transported materials and marked with symbols and letters indicating the country or region of origin, she explained. The profilometer maps the surface of the worn-down seal that produces a digital image of the motifs to help better determine the country of production.

Carr will return to SFA in the fall to finish her master's degree in preparation to graduate in December.