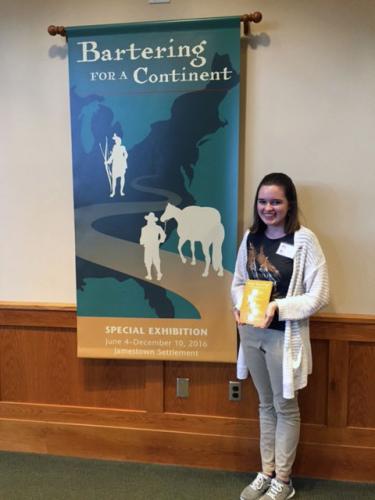 Stephen F. Austin State University history undergraduate Hannah Russell of Houston accepted a summer internship with the Jamestown-Yorktown Foundation in Williamsburg, Virginia. With approximately two weeks remaining, her work has been centered on a special exhibit at the Jamestown Settlement titled 'Bartering for a Continent' that details trade between the early Jamestown colonists and the Powhatan Indians.


NACOGDOCHES, Texas - History books can fall short when describing the sights, sounds and thrills of standing on some of America's earliest colonized lands.

Stephen F. Austin State University history undergraduate Hannah Russell of Houston had the opportunity to close her books and experience her favorite historical period firsthand this summer through an internship at Jamestown-Yorktown Foundation in Virginia.

"Receiving this internship is the beginning of my career in history, and I couldn't be more thankful for this opportunity," Russell said. "I love early American history, but never imagined I would actually be able to work where our country began. My job is only a half mile down the road from the original Jamestown fort and 20 minutes away from where Charles Cornwallis surrendered at Yorktown!

"It's one thing to learn about history in a book, but it's a totally different thing to be able to go where that history happened. To be able to live here and learn and talk about history every day is the opportunity of a lifetime for me."

The experience is a dream come true for Russell who has had a passion for early American history since she was a young child.

"I knew that I wanted an internship somewhere to begin my career in history. At first, I was only looking in the Houston area, but then my mom suggested I also look in Virginia because my favorite area of history is early American history, and Virginia is the perfect place to study this era," Russell said. "It also was an added bonus that I have family living here, and they would be able to provide me with housing. Through some searches, I came across several internships, applied and got an internship through the Jamestown-Yorktown Foundation in Williamsburg, Virginia."

One of a couple dozen foundation interns, Russell said she is working in the Jamestown Settlement portion of the foundation. The other two locations are the main offices and the Yorktown Victory Center.

"I am working as a docent at the Jamestown Settlement," she added. "So far, I've mostly been working in our new special exhibit titled 'Bartering for a Continent' that details trade between the early Jamestown colonists and the Powhatan Indians. It also includes an interactive activity for kids, which is mainly what I am doing while I'm here. During the summer, however, I also will be working at various locations throughout the museum, such as our main gallery."

The application process was simple, Russell said. She emailed the foundation intern coordinator in January. With the assistance of SFA Department of History Professor Dr. Elizabeth Deanne Malpass, she applied for the position and was granted a phone interview in early April.

"Hannah Russell is an exceptional student. Her dedication to her field, her sense of discipline and her integrity as an individual all are outstanding. In addition, these are tied intrinsically to a sense of compassion and responsibility," Malpass said. "Her internship with the Jamestown-Yorktown Foundation reflects not only Hannah's instilled family values and her own achievements, but also the growth potential that others see in her future.

"Hannah's internship with this foundation is unique and outstanding. It recognizes the investment and the trust that the government, private foundations and the academic community place on individual students as citizens and their role of leadership in the growth of the nation."

Russell will return to SFA in the fall as a junior history major with a secondary education minor. She will continue working as a photographer for The Pine Log and also will begin working in the university's Academic Assistance and Resource Center as a student instructor for introductory history courses.