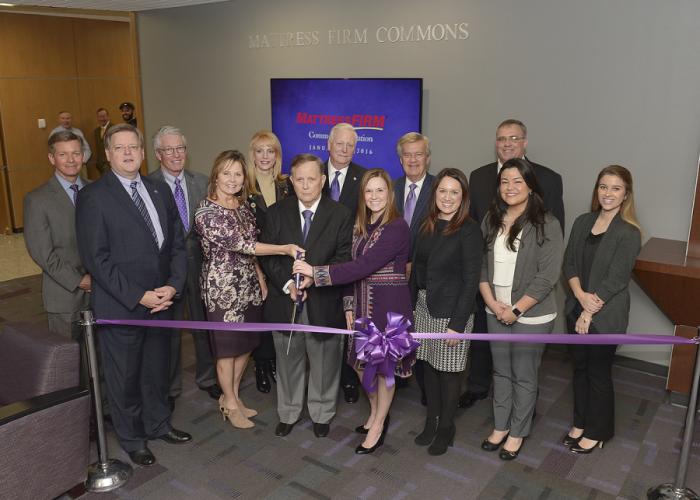 
NACOGDOCHES, Texas - Three ribbon-cuttings held in Stephen F. Austin State University's Nelson Rusche College of Business made history on Monday. According to President Baker Pattillo, it was the first time three ribbon-cuttings had been held in one day at the university.

The ceremony marked the official opening of three new features within the college - the Mattress Firm Commons, the Marleta Chadwick Student Financial Advisors suite and the Mark T. Layton Lobby.

Donors and representatives from each group were in attendance, and Pattillo credited each group with making the renovations possible.

"These renovations have been a dream for many people for many years," Pattillo said. "Because of the generosity of some of our alumni and friends of the university, we were able to move forward with this project."

The renovations on the first and second floors of the building began in summer 2015 and align with the college's strategic focus, said Dr. Timothy Bisping, business dean.

"One of the wonderful things about SFA and the Nelson Rusche College of Business is that everything we do is about the success of our students," Bisping said. "We have a new mission with a strategic focus within the college-Learn, Launch, Lead. We want our students to learn the material they need to be successful. We want to help them launch successful careers, and we want them to become leaders in their fields."

The Mattress Firm Commons creates an environment that fosters collaboration and teamwork. Amanda Robbins, director of talent acquisition and retention for Mattress Firm, spoke on behalf of company CEO Steve Stagner, a 1991 SFA marketing graduate who was instrumental in creating the commons area.

Robbins said that during her time as an employee, Mattress Firm has grown from 300 stores to 3,500 stores nationwide.

"SFA is one of the universities that helps us achieve that success and growth," Robbins said. "The Mattress Firm Commons supports the learning environment and collaborative space we have at Mattress Firm. It's very exciting to see and be a part of. We hope the building will foster a lot of learning and hopefully more Lumberjacks will join Mattress Firm."

"Mother was one who never wanted the limelight or spotlight. We walked into the lobby and the suite is exactly where mother would be-in the corner," David Chadwick said. "There is no mistake of its simplicity, and there is no mistaking that Marleta Chadwick is in the building. We are so grateful that you acknowledged her, and for what you are doing to prepare for East Texas and our whole country for the future."

The final ribbon-cutting of the day honored Mark T. Layton, who earned a Bachelor of Business Administration in 1974 from SFA. A letterman on the Lumberjack football team, Layton is a licensed CPA and joined Deloitte, where he developed financial expertise with significant experience in corporate governance, risk management, regulatory compliance and financial reporting.

"Mark Layton served in many senior leadership roles at Deloitte, including his role as managing partner of Deloitte's North Texas office," said Jason Downing, Deloitte North Texas managing partner and also an SFA alumnus. "As a fellow SFA graduate, it gives me a great sense of pride to see Mark's legacy celebrated in the university that prepared both of us for our business careers at Deloitte. We commemorate Mark's retirement by dedicating the Mark T. Layton Lobby to the students who will walk these halls for generations to come."

Layton led an initiative at Deloitte to recruit and hire SFA business graduates. Many of his friends and colleagues, in honor of his loyalty and dedication to his profession, made contributions that allowed the lobby to be named in his honor.

"When you walk into the Mark T. Layton Lobby and throughout these renovated areas, you see professionalism," Bisping said. "When our students walk out as graduates, land their first job and walk into a professional environment, it will not be foreign to them."

Bisping said the college will continue the renovation project on the third and fourth floors of the McGee Building. He described these areas as blank canvases that can be utilized to further the college's mission.

For more information about the SFA Nelson Rusche College of Business, visit www.sfasu.edu/cob.