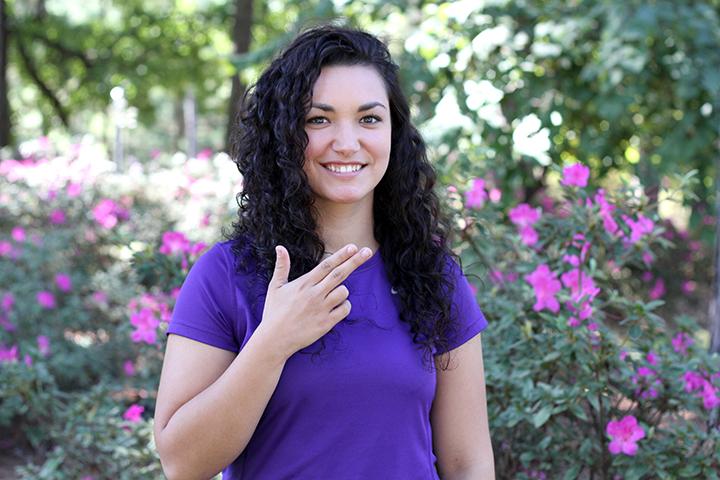 The award was established in honor of Pegg, a New York City businessman who suffered a heart attack and stroke in 1986 at the age of 52. Pegg changed his lifestyle by altering his diet and adding exercise to his daily routine. These lifestyle changes helped Pegg live 27 more years.

Pegg’s daughter, Elizabeth Pegg Frates, and her family established the award to promote lifestyle medicine at the student level, according to the award’s website.

Dr. Mark Faries, associate professor of kinesiology and health science at SFA, serves on the board of directors of ACLM and can attest to the strong student competition associated with the award.

“Alyssa was competing against the best medical students and allied health students in the nation,” Faries said. “The competition was tough, and her application was reviewed by highly respected experts, including those from our highest-ranking medical schools. She is very deserving of this award.”

Abreu, a Spring, Texas, native, said the award came as a surprise.

“It was a really competitive award, so it’s an honor and exciting to know that I was chosen for it and am able to represent SFA,” Abreu said.

The award requires Abreu to create a lifestyle medicine interest group at SFA in collaboration with medical schools and other health care professional training programs in Texas. She will organize and market webinars where faculty members and practitioners with a passion for lifestyle medicine can present lectures to students and the community.

“Not a lot of people are familiar with lifestyle medicine, and the point of the award is to promote and educate people about it,” Abreu said. “Lifestyle medicine is a mix of kinesiology and medicine — the two things I am so passionate about. It’s about using lifestyle to prevent, treat and even reverse chronic diseases by treating their cause, rather than simply treating the symptoms of the diseases.”

Abreu has known she wanted to work in health care since she was a child, and she considered attending medical school. For three years, Abreu and her family lived in Douala, Cameroon, in Africa. It was there she witnessed medical disparities firsthand.

“If you get sick in America, you go to the doctor. People don’t always have that privilege in Africa,” Abreu said. “That’s where my passion started for health in general.”

A bout with Malaria further convicted Abreu to help underserved populations with health issues. Currently, Abreu is working as a medical assistant at Cline Family Medicine in Nacogdoches. She also is a graduate assistant for the Department of Kinesiology and Health Science at SFA. After graduating with her master’s degree, Abreu plans to attend physician assistant school and work as a PA in medically underserved areas.

“The people whom I’ve met at SFA and who I am involved with in this field have helped me realize exactly what I want to do in my career,” Abreu said. “The kinesiology faculty and staff members at SFA are amazing.”