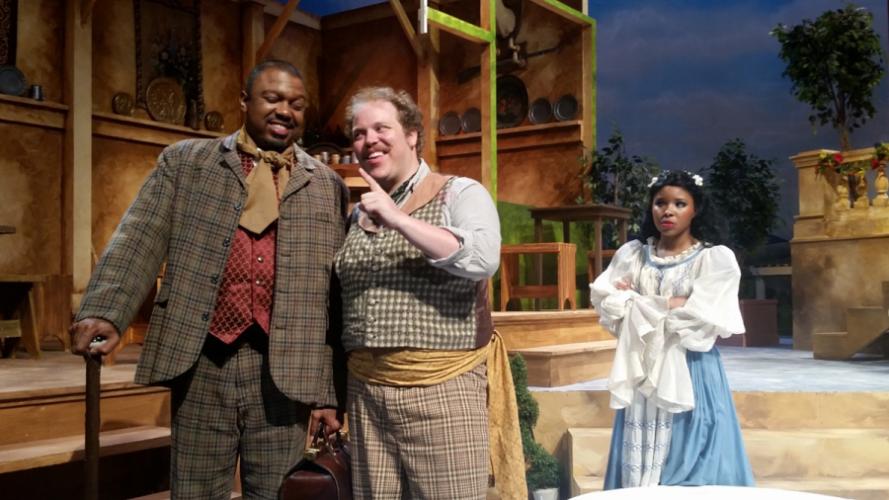 
NACOGDOCHES, Texas - The elaborate opera houses in metropolitan cities aren't the only places to experience the beautiful sounds and scenery of a full-scale opera production.

The SFA College of Fine Arts, School of Music and School of Theatre will present "The Bartered Bride" at 7:30 p.m. Thursday through Saturday, April 7 through 9, in Turner Auditorium. Considered Czech composer Bedrich Smetana's most beloved and well-known comedic opera, "The Bartered Bride" will feature SFA's outstanding student singers accompanied by an orchestra and staged with full set and costumes.

"The Bartered Bride" takes place in a Bohemian village on festival day when a traveling circus troupe stops to entertain the villagers. Costumes are colorful European village attire, and the set is a village street with colorful houses lining the street.

Prior to coming to the university, many SFA voice students had never experienced opera. But after four years of training, many of these same students have landed "major roles in major opera houses all over the world," Dalton said. SFA provides opportunities for voice students to perform in full-scale operas that many universities of similar size do not.

"We teach singers to sing really well; we build voices," she said. "We have hardworking students, wonderful teachers and a tradition of excellence."

Voice students Amanda Sheriff and Brenton Mattox, who have lead roles in "The Bartered Bride," had little experience with opera prior to attending SFA. Both students came to SFA with the notion that choral conducting would be their focus of study. But their vocal training in opera at SFA has given them other options.

"I didn't have a lot of experience with opera, other than seeing little snippets on YouTube," Mattox said. "It wasn't until my freshman year when I was in the chorus of 'Susannah,' and I thought 'wow, this is amazing.'"

Taking voice lessons, working on technique and learning the repertoire and vocal literature also spurred their interest in opera.

"When I originally came to SFA, I was not anticipating being trained as a classical opera singer," Sheriff said. "I expected we would take voice lessons to make us better choir singers. So when I was told we were going to start singing arias, I asked, 'what's an aria?' I was familiar with a few solo and ensemble pieces in high school, but that was all the experience with opera that I had prior to coming to college.

"Now, where we're at with 'Bartered Bride,' and having the leads, that's something I could not have imaged," she said. "I think that's a stigma that opera has with a lot of people … that opera is not attainable for everyone."

Justin Dunkle, a graduate voice student from Greencastle, Pennsylvania, agrees that opera is "a stigmatized genre," he said.

"It's not only stigmatized, it's misrepresented by the public media," he said. "People think of a big fat lady with Viking horns. That's one opera.

"I hear people say they don't like classical music or opera, yet, if you look at film scores and movies, classical singers play a huge part, whether in a chorus or a solo role," Dunkle said. "I believe that if people just give opera a chance, they will be pleasantly surprised at how relatable opera is to the human experience. People have the misconception that opera is about really lofty or elitist topics. But the stories of opera are based on love, hate, greed, sadness, happiness, joy … so many things that are crucial to the human experience. And to put that together with costumes and lighting and fabulous sets and music, I can't believe that someone would go to an opera for the first time and come out totally hating it. Everyone needs to experience opera."

Making their characters "easily understood and relatable" to the audience is important to the performers, Mattox said.

"It makes it easier for the audience to be engaged in the performance, and audience engagement makes us want to be better performers," he said.

Sheriff, a senior from Houston, plays the character of Marenka, who is in love with Jeník. But Marenka's parents have engaged marriage broker Kecal, played by Mattox, a graduate student from Jasper. Kecal's job is to marry Marenka off to the son of Tobias Micha, a wealthy landowner. The son turns out to be a bumbling, stuttering simpleton - Vasek. It seems that Marenka's father owes Micha a long-standing debt. When Kecal bribes Jeník to renounce his claim on Marenka, all seems to be lost, until Jeník reveals that he is the long lost son of Micha from a previous marriage.

"Marenka is being forced into a marriage that she doesn't want; she's in love with another," Sheriff explained. "She's trying her hardest to be with her love while trying to respectfully defy her parents. That's relatable to anyone. I try to put in my actual emotions and how I would react. Dr. Dalton's blocking and instructions throughout allows us to easily become those characters.

"And, it's just beautiful music," she added. "So you want to sing it."

Mattox describes his character as "over the top."

"He is a marriage broker who is trying to follow through with a contract that was signed when the two were children," he said. "But he runs into complications, because Marenka doesn't want to do it (marry Vasek). But Kecal is good at what he does and does not fail. I enjoy being Kecal because he is charming and very engaging, and he uses that charm to get the job done."

Dunkle, who plays the lead character of Jeník, appreciates the cleverness of his character and his ability to be inventive and a little tricky.

"There's a lot of mystery to this character, but he is confident," Dunkle said. "I see a lot of myself in Jeník. He loves deeply and passionately. The crux of the opera is when Jeník 'sells' Marenka off, but it's for his own gain. He knows what's going on, but no one else does. I think that's one of my favorite aspects of this character - to have insider knowledge."

While some student performers discovered their passion for opera only after coming to SFA, Dunkle said he began at an early age singing, performing and "wanting to be the center of attention," he said.

"And for me, opera seems to be the apex of what the human voice can do," he said. "It's the best of the best. That's not to say that pop or jazz singers aren't any less of musicians. But opera pushes the human voice to its utmost limits, and that, for me, was a goal that I had to chase. The more I experienced opera and the more I learned about the craft and classical singing, the more I found that it was the thing that fulfilled me the most."