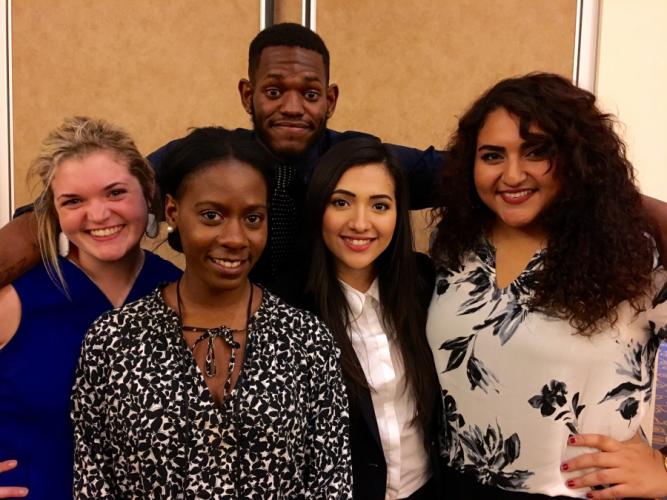 
NACOGDOCHES, Texas - Classes across the Stephen F. Austin State University campus collaborated during the course of several months to produce an entry for the National Student Advertising Competition, which took place this month.

Sponsored by the American Advertising Federation, the annual program challenges college students to create an integrated marketing campaign for a specific product, service or brand.

"My class, Advanced Advertising II, worked on the campaign all semester," said SFA student Dayna Kelley of Richmond. "We began doing research on Snapple as well as Snapple competitors almost immediately into the semester. It was important for us to begin early so we could get to know Snapple as a brand and also to find out what types of people purchased Snapple and why they chose Snapple over other juice/tea drinks.

"Along with our own research, Snapple provided us with a packet that entailed what they were looking for us to do as well as some research they previously did," she added. "Once we began to put together our campaign, the School of Art became very involved and began to design our PowerPoint and that really brought our campaign to life."

Country, pop, salsa and hip-hop jingles, a step dance routine and an innovative vending/recycling machine were part of SFA's entry in NSAC District 10. The competition took place Thursday through Saturday, April 14-16, in Lubbock.

"It definitely was not what I expected," said SFA student Nadia Oulahna of Houston. "We had to use microphones and present in front of not only judges but a crowd. It was kind of intimidating for many of my peers. I am a radio/TV major, so naturally I wasn't nervous because I am used to speaking in front of an audience. It kind of blew us away because we thought it would just be us and the judges and maybe a few other people, but it was a bunch of other schools that were watching us give the presentation as well."

Several SFA colleges collaborated to create the ad campaign. Mass communication classes researched the product and wrote the jingle while SFA professor of graphic design Peter Andrew's advertising design students in the School of Art created the layout and 27-page book on the campaign.

Dr. Kevin Kelleher, SFA assistant professor of music and director of the sound recording technology program, worked with SFA mass communication professor Dr. Linda Bond and her students to decide on a beat and chords for the music. This is the second time the SRT students have worked with mass communication. The first collaboration resulted in jingles for Timber Falls Water Park in Nacogdoches.

Bond traveled with 20 mass communication students to Lubbock to present SFA's campaign in the annual competition.

"The drive to Lubbock was long!" Kelley said. "However, it worked in our favor. Dr. Bond had the presenters practice every 100 miles. By the time we arrived, we were starting to feel extremely comfortable with our presentation.

"Once at the hotel it was noticed exactly how large this competition was. Everywhere you looked there was a different group of dressed-up students preparing themselves. I think a lot of us were beginning to really feel the pressure. We knew it was up to us to present the work of three academic areas at SFA."

Caroline French from national Snapple headquarters said she loved SFA's jingles and noted the "very clever use of jingles in order to bring the segment to life."

SFA students will present their Snapple campaign at 5 p.m. Monday, May 2, at the Cole Art Center in downtown Nacogdoches. The event is free and the public is invited to attend.