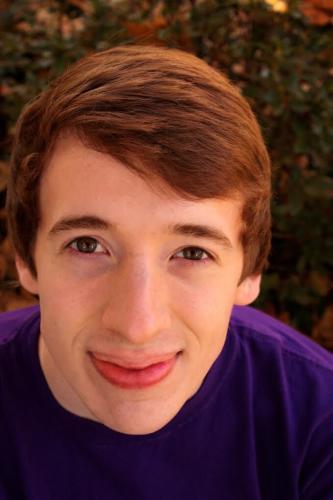 Stephen F. Austin State University music composition sophomore student Jesse Edwards of Tyler will soon have one of his compositions premiered at the 2016 Alfred Schnittke International Composers’ Forum and Competition in Lviv, Ukraine. His woodwind quintet, “Saturday Afternoon,” will be performed Dec. 7 in the concert hall of the Lviv Philharmonic Society.

Tyler sophomore Jesse Edwards will soon have one of his compositions premiered at the 2016 Alfred Schnittke International Composers’ Forum and Competition in Lviv, Ukraine. His woodwind quintet, “Saturday Afternoon,” will be performed Dec. 7 in the concert hall of the Lviv Philharmonic Society.

“Although there is another level to the competition that will occur in Ukraine, the honor he has already earned by getting this far is on par with the highest accomplishments any of our SFA students have achieved,” Lias said. “Added to that, the pivotal experience he’ll have by attending this international symposium will be truly life-changing for him.

“We are extremely proud of Jesse’s accomplishments and expect even more will come as he continues to grow as a composer,” Lias added.

The competition is held in conjunction with a series of concerts, the first of which took place Nov. 30 and the others are scheduled for Dec. 7 and Dec. 12, in Lviv where Edwards will be involved with and attend rehearsals of his piece and eventually hear it premiered. At the conclusion of the concert series, three official winners will be announced.

Inclusion of Edwards’ work in the competition elevates him from student composer to international composer.

“It’s a testament of my composition ability,” he said, “particularly to musicians in the future of whom I want to play my music.”

“An international premiere associated with the Lviv Philharmonic shows to any musicians short of that status that I'm capable of writing for them and having my music performed by them,” he said. “This means that a lot of really good musicians will take me more seriously than when my biggest premiere was by a college orchestra, which is still great, and I’m not bashing that.”

Edwards said he always takes a great deal of time composing works musicians such as those performing these competition pieces would consider of high quality.

“Before doing anything with a piece of music, there has to be a lot of tedious editing to make the music look and sound as though it could and should be played by a group of reputable musicians such as this,” he said “So when cool opportunities like this come around, all I have to do is submit.”

Edwards said he is able to attend the conferences and concert in Lviv due to the “incredible generosity and support” of Dr. A.C. “Buddy” Himes, dean of the College of Fine Arts, and Dr. Michael Tkacik, director of the School of Honors.

Edwards’ goal is to have a successful career as a composer.