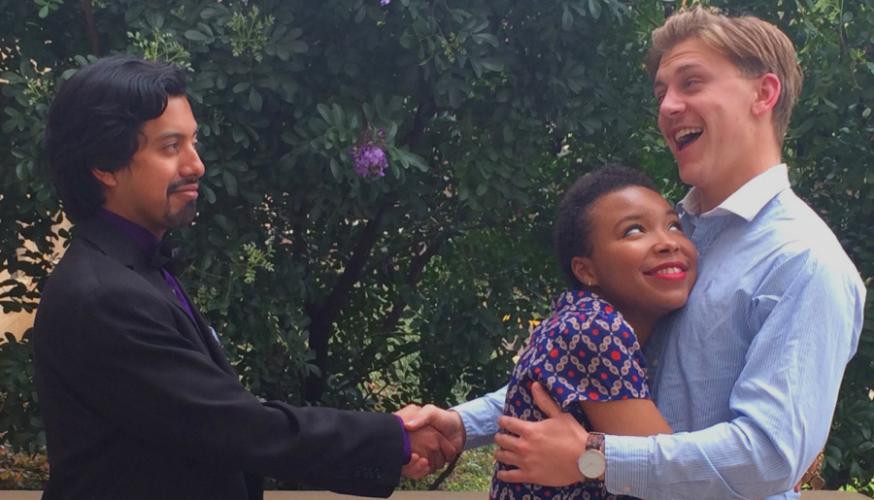 Kecal, played by El Paso senior Juan Garza, accepts the barter from Jenik, played by Granbury senior Blake Bridges, behind the back of Marenka, played by Houston senior Amanda Sheriff, in the upcoming SFA Opera Theater production of "The Bartered Bride."


NACOGDOCHES, Texas - The Stephen F. Austin State University College of Fine Arts, School of Music and School of Theatre will present "The Bartered Bride" at 7:30 p.m. Thursday through Saturday, April 7 through 9, in W.M. Turner Auditorium on the SFA campus.

The opera, considered Czech composer Bedrich Smetana's most beloved and well-known comedic opera, will feature SFA's outstanding student singers accompanied by an orchestra and staged with full set and costumes, according to Dr. Deborah Dalton, professor of voice at SFA and the opera's director. She described the opera as "a brilliant lyric comedy with a strong nationalistic flavor."

"Composer Bedrich Smetana wrote spirited, tuneful melodies that are firmly rooted in his Czech homeland, but his music has a universal appeal," Dalton said. "Smetana's operas truly established him as the father of Czech classical music."

Dalton explained the synopsis of "The Bartered Bride" as taking place in a small Bohemian village. It is festival day. Marenka is in love with Jeník, but her parents have engaged Kecal, a marriage broker, to marry her off to the son of Tobias Micha, a wealthy landowner. The son turns out to be a bumbling, stuttering simpleton - Vasek. It seems that Marenka's father owes Micha a long-standing debt. When Kecal bribes Jenik to renounce his claim on Marenka, all seems to be lost, until Jenik reveals that he is the long lost son of Micha from a previous marriage.

"The music is beautiful and catchy enough to whistle tunes as you leave the theatre," Dalton said. "The arias have sweeping, long melodic lines that carry the listener along with the emotions of the character singing it. The chorus of villagers and their music is a character unto itself, and the men sing one of the best drinking songs in the repertoire. There is also a traveling circus troupe that comes to entertain the villagers. We even have a bear!"

With approximately 150 people involved in the production, "The Bartered Bride" is a huge undertaking, Dalton said. There are 56 cast members, 42 musicians in the orchestra and many others working backstage.

"As always, our first concern is to provide an excellent learning experience for our voice students," she said. "This opera has several leading and featured role for all voice types, and we have students with the needed voice types who are ready to sing these roles."

"The Bartered Bride" is "the perfect opera for first-time opera-goers," Dalton said.

"It is colorful, entertaining, funny and has an exceptional score that is beautifully sung and played," she said. "The students are outstanding in their singing and acting of the comic and sometimes tragic plot turns."

The set, designed by Richard Ellis, is a picturesque village street and the costumes by Angela Bacarisse are "colorful and fun," Dalton said.

"People who come to see this opera will leave the theatre saying 'I never knew that opera could be so fun,'" she added.