SFA pianist to perform recital with his children 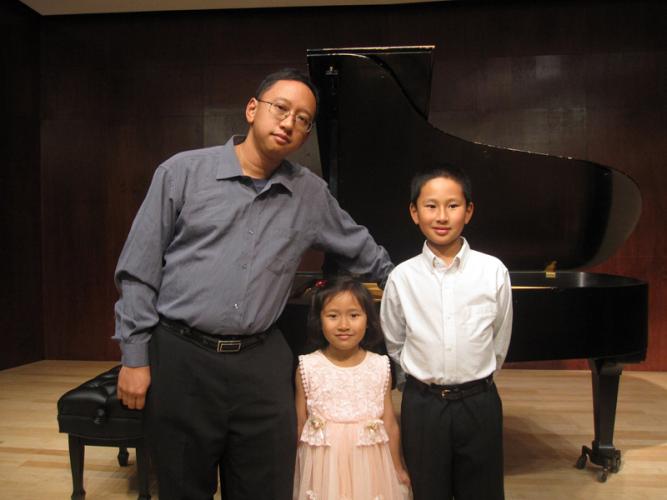 Mario Ajero, associate professor of piano pedagogy at Stephen F. Austin State University, will present a recital with his children, Olivia, 7, and Antonio, 11, at 7:30 p.m. Thursday, Feb. 11, in Cole Concert Hall on the SFA campus.

The piano concert, which also features Ajero's children, Antonio, 11, and Olivia, 7, is a joint presentation of the SFA College of Fine Arts and School of Music and is part of the Cole Performing Arts Series.

Ajero has performed before SFA audiences with his son, who is an award-wining pianist, on several occasions.

"Many people are familiar with my 11-year-old son Antonio due to his recent accomplishments," Ajero said. "Not a lot of people realize his 7-year-old sister Olivia also plays piano and shows similar promise. I am looking forward to this opportunity to share the stage and piano with my two kids."

The program includes Ludwig van Beethoven's Piano Sonata in E-flat Major, Op. 81a as one of the featured works. It is sometimes known as the "Les Adieux" sonata, according to Ajero. The work was started in 1809 and depicts the departure of Beethoven's patron Archduke Rudolf who fled Vienna due to the advancing Napoleon and his army upon the city.

"The first movement is entitled 'Das Lebewohl' and is a musical farewell to the archduke," Ajero said. "The opening motive imitates a distant horn call where Beethoven makes his intentions known by writing the word 'Le-be-wohl' over the three notes. The second movement, 'Das Abwesenheit,' expresses Beethoven's feeling of loss and loneliness due to the departure of the Archduke. The third movement, 'Das Wiedersehen,' is a brilliant display of musical euphoria on Beethoven's hope to see his friend once again some day."

Two pieces from "Estampes" by French impressionist composer Claude Debussy will also be on the program. The first piece, "Pagodes" demonstrates the heavy influence of Asian music on Debussy after he witnessed a Javanese gamelan group at the 1889 Exposition Universelle in Paris, Ajero explained.

"His ability to bring this distinct Asian sound to the piano, especially in this piece, was quite revolutionary," he said. "'Jardins sous la pluie' (Gardens in the Rain) is a toccata showpiece with a wide palette of chromatic, whole tone, major and minor keys and relentless rhythms to evoke the imagery of rain-soaked gardens. Within the work, Debussy incorporates French folk tunes for moments of respite, but the storm builds up again to a climax until the sun breaks through as the tonality shifts from minor to major at the end."

The performance will also feature "Romance" by Sergei Rachmaninoff, which comes from two pieces for six hands at one piano and was composed in 1891 for three sisters who were cousins of the composer.