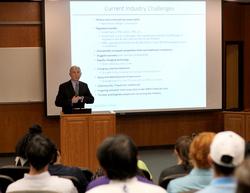 
NACOGDOCHES, Texas - The McGee Business Building, Room 133, was almost at full capacity as dozens of Stephen F. Austin State University Rusche College of Business students listened to Citizens National Bank President and CEO Brad Tidwell and his executive team discuss the current and future state of the banking industry during a recent Evening with Executives event.

Citizens National Bank began in Henderson, Texas, in 1930 and now has 29 branches and $1.7 billion in assets across East and Central Texas. During the evening, Tidwell discussed the history of the banking industry, consolidation trends, the effects of technology and more.

He told the crowd that the industry is changing and stressed the need for young talent and those who can think differently about the industry.

"During the past five years the banking industry has seen more change than in the 50-year period between 1930 and 1980," Tidwell said.

Dr. Tim Bisping, dean of the Rusche College of Business, said the event was an opportunity for students to gain insight into the industry from an elite team of leaders.

"Having the opportunity to hear about the banking industry firsthand from such an accomplished team of executives was a truly special experience for our students," Bisping said.

Kerry Bennett, SFA adjunct professor in the Department of Economics and Finance, helped coordinate this event.

"The executive team made it clear that the banking industry faces a talent gap and needs a new generation of bankers able to adapt to an ever-evolving landscape," Bennett said.