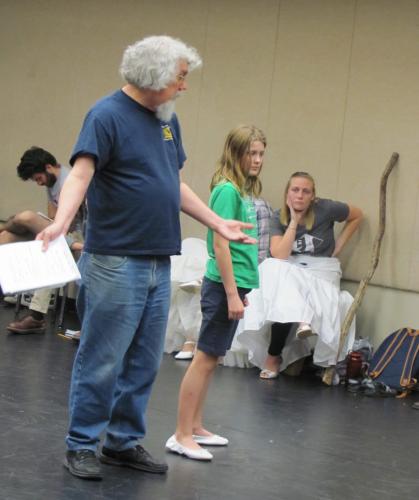 Dr. Richard Jones, professor of theatre at SFA, assists Mae Johnston, guest actor playing the role of Josie, with blocking for School of Theatre’s production of “By the Bog of Cats” by Irish playwright Marina Carr while theatre student Kara Bruntz, in the lead role of Hester Swaine, looks on. The show is at 7:30 p.m. Tuesday through Saturday, Nov. 15 through 19, in W.M. Turner Auditorium on the SFA campus.


NACOGDOCHES, Texas – The Stephen F. Austin State University School of Theatre’s presentation of Irish playwright Marina Carr’s “By the Bog of Cats” in the fall of 2016 is not coincidental, and it was not selected by its director on a whim.

Rather, 2016 happens to be the centennial year of the Easter Rising in Ireland, a short-lived but extremely significant revolt against British rule, which led eventually to the establishment of the Irish Free State.

Dr. Rick Jones, professor of theatre and interim director of the School of Theatre, directs the play. Jones specializes in Irish theatre in his scholarly work; much of his research for the past 20 years has focused on Irish versions on inherited material, including Greek mythology. He’s taken SFA theatre students to Ireland six times to study Irish theatre, taught courses on Irish theatre and authored numerous publications on the subject. Still, he’s never had the opportunity to direct an Irish play in his 16 years at SFA, and the centennial of the Easter Rising seemed an appropriate time to break that drought.

Described by Jones as “hilarious in places, darkly disturbing in others,” “By the Bog of Cats” is Carr’s best-known play. Loosely based on the Medea legend, this haunting drama is “part tenderness, part quirkiness, and part ferocity,” Jones said. “It is my favorite play by my favorite contemporary Irish playwright.”

This play has been on Jones’s “someday” list for a long time, but he wasn’t confident he could cast the youngest character – the role of 7-year-old Josie – using college-age students. But when he learned that Junior Jacks veteran actor Mae Johnston, 11, might be interested in performing in the Mainstage production, successful casting of “By the Bog of Cats” became a possibility. Junior Jacks is the summer theatre camp at SFA for students in third through ninth grades.

“Mae is a remarkably intelligent girl – a quick study,” Jones said, adding that she came with recommendations from associate professor CC Conn, the driving force behind Junior Jacks, and from the SFA theatre students who worked with her in the camp. “In order to put the show in this season, I needed to know I could fill that role. So, she’s been in the role since May.”

All these aspects came together this year to allow “By the Bog of Cats” to be included in the 2016-17 Mainstage Series.

Dialect will be one of the greatest tasks all the actors will face in this play, Jones said. The skills of new theatre faculty member and visiting assistant professor Stephanie Murphy will be utilized to help students conquer dialect challenges.

“We will be using three different variations of Irish dialect, loosely described as northern, western and an upper-class Dublin accent,” he said.

In addition to the dialect, another challenge will be the portrayal of the complex characters that are “more human” in the sense that they have both positive attributes and flaws. Foremost among these characters is the play’s protagonist, Hester Swane.

As the play opens at dawn, Hester receives prophecies that she will be dead by dusk. It is the wedding day of the man who was once her common-law husband and is the father of her child, and he is being wed to someone younger, prettier and richer, Jones explained.

“Basically, it is a day-in-the-life, but it is a significant day,” Jones said. “Hester is extraordinarily strong-willed, but she’s pushed to the edge and reacts with vengeance. Whereas we like certain people more than others, Hester is vengeful, given to violence, sometimes dishonest, and she’s got to be our heroine. She has to be sufficiently charismatic, and it is important that we understand why she behaves the way she does. We don’t have to approve of her actions, but we have to have some sort of admiration for her.”

Whereas a good share of the play is funny, it is a play that is “ultimately about sadness and anger,” Jones said. “Fitting those ideas into the same play is my challenge.”