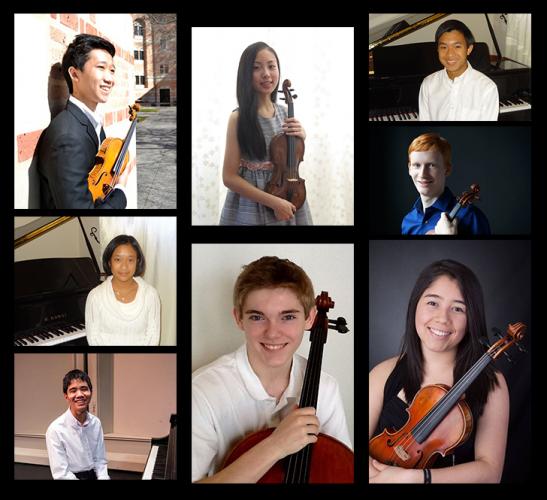 Celebrating its ninth year, the Schmidbauer Competition holds the highest standards in artistry and performance. It is designed to attract young high school musicians ages 15 to 18 who seek to continue future careers involving music and are looking at schools that may be best suited toward helping them reach their goals. It is SFA's goal to be that institution, according to Dr. Gene Moon, director of orchestral studies at SFA and of the competition.

Slated for Saturday, Jan. 30, the competition takes place in Cole Concert Hall in the Tom and Peggy Wright Music Building on the SFA campus. The semi-final round of the competition begins at 1 p.m. Finalists will be announced at approximately 5 p.m. Those who move onto the final round will perform in a live concert starting at 7:30 p.m.

Ashley Wu started her piano lessons at age 6 with Elena Bakina. Starting in spring 2015, she is under the coaching and guidance of Dr. Sergey Kuznetsoff. Ashley has participated in piano competitions locally and internationally winning numerous prizes. Most notably, she won in Italy in the 22nd Concorso Internazionale per Giovani Musicisti Citta di Barletta in 2012 as silver medalist and in the 17th Concorso Internazionale Di Musica Pietro Argento in 2014 as bronze medalist. She was a silver medalist for the Seventh International Chopin Youth Competition in 2011. In December 2014, she finished as semi-finalist in the Cesar Franck International Piano Competition headed by Dmitri Bashkirov in Krainem, Belgium. Locally, she won gold medals for Conroe Music Teacher Association (CMTA) Cash Award Piano Contest in 2014, Legacy Concerto Competition in 2011, and scored CMTA Theory Tests with highest distinction the past five years. By winning gold medal at the Legacy Concerto Competition, Ashley was invited to perform with Conroe Symphony. She has also participated in master classes with Dr. Robert Roux, Dr. Steven Spooner, Dr. Tamas Ungar, Dr. Nelson Delle-Vigne Fabbri, and Dr. Namik Sultanov.

Ethan Le is a senior at Cinco Ranch High School in Katy. He began studying the violin at the age of 6 and began piano lessons at 7. For the past nine years, he has studied with Kenneth Goldsmith at the Shepherd School of Music. He has been chosen multiple times through auditions as a Houston Young Artist by the non-profit organization Houston Young Artist's Concert as violinist and pianist, which resulted in a performance on "The Front Row," a Houston public radio show. Ethan made his orchestral debut at 14 with the Houston Civic Symphony as its winner of the Young Artist Concerto Competition Junior String Division. In that same year, he also won the Clear Lake Symphony Youth Concerto Competition Junior String Division. As its winner, he was given the honor of performing with that orchestra, also. As a freshman, he represented Cinco Ranch High School on the TMEA All-State Symphony Orchestra, 1st violin 3rd chair. In 2014 and 2015, Ethan received first place at the Clear Lake Symphony Youth Concerto Competition in the senior string division and at the Houston Civic Symphony Young Artist Concerto Competition in the senior division.

Eric Chen is a senior at Plano Senior High School. He began learning music at the age of 3 and started playing the piano at 4. Currently, he is studying with Dr. Catharine Lysinger, senior lecturer in piano and piano pedagogy at Southern Methodist University. He has won numerous competitions, including the 2014 Collin County Youth Artist Competition where he placed second in finals, won first prize in the senior concerto division of the Dallas Symphonic Festival in both 2014 and 2015, and first place in the junior division of the Baylor-Waco Piano Competition. Eric also studies cello with Jung Shin Lewis. He placed as seventh chair in the 2015 TMEA Philharmonic All-State Orchestra and was part of the 2014 and 2015 TMEA Honor Full Orchestra. Eric has also earned accolades in the Encana-Plano Science Fair and the DRSEF, and was invited to participate in the 2013 Vienna International Piano Festival. He serves as president of the Plano Teen Harmony Orchestra.

Nathaniel Wu began his piano studies at age 5 with Elena Bakina. Starting in spring 2015, he is under the coaching and guidance of Dr. Sergey Kuznetsoff. He has participated in piano competitions locally and internationally winning numerous prizes. Most notably, he won in Italy in the 22nd Concorso Internazionale per Giovani Musicisti Citta di Barletta in 2012 as silver medalist of Group B and in the 18th Val Tidone International Music Competition in 2015 as honorable mention of Group C as well as finishing as semi-finalist in the Cesar Franck International Piano Competition headed by Dmitri Bashkirov in 2014. Locally, he won gold medals for cash award piano contests in 2012 and 2014, Legacy Concerto Competition in 2011, and scoring CMTA Theory Tests with highest distinction the past 10 years. By winning a gold medal at the Legacy Concerto Competition, Nathaniel was invited to perform with Conroe Symphony. He has also participated in master classes with Dr. Robert Roux, Dr. Tamas Ungar, Dr. Steven Spooner, Dr. Nelson Delle-Vigne Fabbri and Dr. Namik Sultanov. Furthermore, Nathaniel played flute as second instrument and was an active member of his school flute ensemble and chamber music up to his sophomore year. He won placements with regional and state auditions annually from 2009 through 2015 for both solo and ensemble performances.

Samantha Choo, 16, began studying violin at the age of 7. She currently studies under Professor Philip Lewis. Samantha performed at the 2014 Basically Beethoven Festival's Rising Star Recital and played at Chamber Music International's pre-concert. She has soloed with the Meadows Symphony Orchestra and Greater Dallas Youth Orchestra as their concerto competition winner. She won top prizes in the Schmidbauer, Juanita Miller, Chamber Music International, Collin County Young Artists, Vernell Gregg Young Artists, and Dallas Symphonic Festival concerto competitions. Her summer activities include attending IU Jacobs School of Music's Summer String Academy and UTA's Texas Chamber Music Institute where she received merit scholarships. She has also joined the National Taiwan Symphony Orchestra International Youth Orchestra Camp and UNT's Summer String Institute. Samantha has performed in master classes for David Chan, Gary Levinson and Mimi Zweig. Samantha is the 2015 recipient of the Sheila and Werner Harms Young Artist Scholarship. She is the co-concertmaster of GDYO and has been in the program for eight years. She was concertmaster of the Jasper Symphony Orchestra and the 2014 National and Texas Honors Full Orchestra. She also had the honor of playing with the DSO on NPR's "From the Top." Samantha's artwork has won top awards in the Congressional Arts and Texas VASE competitions. She is heavily involved in school clubs and has held many leadership positions such as president of her school's National Junior Art Honors Society and being an orchestra officer.

Spencer Sharp is a violinist who has won more than 20 young artist competitions in the past three years. He started playing at age 4, and was on stage by age 5, sharing his talent with the world. He has performed solo and studied internationally in China, Austria, Spain, France and South Korea. He has played solo with the Lebanon Symphony Orchestra, the Belleville Philharmonic, the Columbus Symphony's Young Artists' Showcase, the Evansville Philharmonic (eight concerts), the St. Louis Civic Orchestra, the McConnell Arts Center Chamber Orchestra, the Blue Ash/Montgomery Symphony, and the Louisville Symphony Orchestra (three-concert subscription series). In 2014, he performed the Korngold Violin Concerto in concert in Spain, accompanied by a Spanish national pianist. He has also played solo at Carnegie Hall (twice), and played a solo at the Kennedy Center. Spencer frequently performs on radio and television, and has played for the Midwest satellite of the Jerry Lewis Telethon. He is homeschooled to give him freedom to travel and perform. He studies violin with Gabe Pegis, principal second of the Cincinnati Symphony.

Alexander Davis-Pegis began his cello studies at the age of 4. He has participated in summer music programs including the Chautauqua Music Camp, Sound Encounters, Lonestar Young Artist Program, and the Heartland Chamber Music Festival. Alex was a member of the 2008 and 2010 Suzuki Youth Orchestra of the Americas and was a master class participant at the 2010 National Suzuki Association Conference. He was the 2012 MTNA State Junior Division winner and national finalist as well as a semi-finalist at the 2015 Juanita Miller Competition. Alex is a member of the Greater Dallas Youth Orchestra. He studies the cello with his mother, Donna Davis. A senior in high school, he plans on majoring in cello performance.