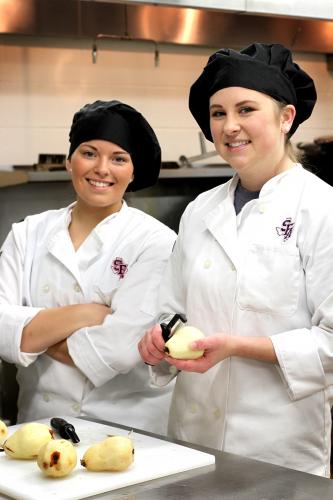 Stephen F. Austin State University seniors Anna Smith and Amanda Powers will join an elite group of students who will work in the American Pavilion at the Cannes International Film Festival in France this May. Both women were accepted into the Cannes Culinary Program and will prepare thousands of meals a day.


NACOGDOCHES, Texas - Music streams inside the Culinary Café kitchen at Stephen F. Austin State University as seniors Anna Smith and Amanda Powers prepare a dish for a local event. Peeling pears, they read over the recipe, planning out the cooking time, temperature and method for creating the dish. On the stove, a rosemary-red-wine-muscadine sauce simmers. After a taste test proves the sauce is the right consistency, Smith and Powers soak the pears in the sauce for flavoring.

Working in the kitchen comes natural to Smith of Thicket, Texas, and Powers of Cedar Park, Texas, who are both SFA hospitality majors. In May, the women will join an elite group of students who will work in France at the American Pavilion at the Cannes International Film Festival Culinary Program.

Smith and Powers were introduced to the Cannes Culinary Program when a representative visited the SFA campus and discussed the many opportunities the Cannes International Film Festival offers students.

"When he talked about the culinary program, it got me so excited for the opportunity to cook in France, go to farmer's markets, meet French chefs, and make more than a thousand meals a day for festival workers and guests," Powers said. "It is truly a dream come true to have been accepted into this culinary program."

Smith agrees the presentation sparked her interest in applying.

"I've always known I wanted to travel to gain experience like this. During my internship, I traveled to Colorado and spent my summer learning what it is like working in a large-scale bakery," Smith said. "Experience, adventure and passion for what I do led me to apply to this competitive program, where only 20 students out of the whole country were accepted."

The Cannes Culinary Program is unique and competitive. Students submit an application, answer essay questions, and send their résumés, transcripts and letters of recommendations to a selection committee.

While at the festival, Smith and Powers will cook and prepare meals for special banquets and events that host celebrities and others. The students' training also will include visiting French kitchens, wineries and farmer's markets.

"Most people have asked, 'Aren't you excited to see celebrities?' And while there is some excitement at the prospect of an Anne Hathaway or Ryan Reynolds sighting, I'm more excited to experience a new place, culture and ultimately, learn more about how to cook some great cuisine," Smith said.

The pair feel they are ready for their adventure in France and said they credit SFA's culinary program with preparing them for the journey.

"My courses at SFA have taught me how to cook for a large number of people, how to plan and what to expect," Powers said. "Chef Todd Barrios has been an amazing professor and has helped teach us what to add to complement flavors, how to prepare and make so many varieties of foods, and so much more."

After graduation, Powers plans to work for Cakes Rock, an in-house bakery in Austin, while Smith hopes to become a pastry chef.

"Baking is a lot different than cooking. There's a science and everything has to be exact or things don't come out quite right. There's something therapeutic about baking," Smith said. "I love the idea that it is both a science and an art - that you can take something so exact and still find ways to make it your own."