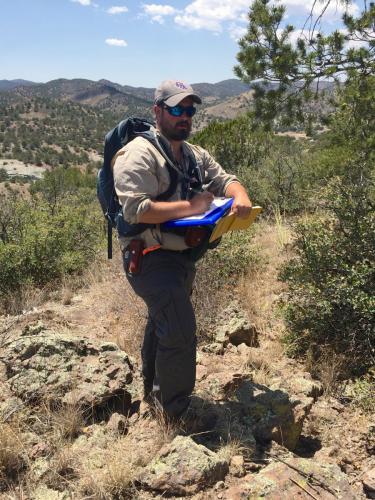 
NACOGDOCHES, Texas — An inaugural scholarship funded through the East Texas Geologic Society in partnership with the Stephen F. Austin State University Department of Geology will be awarded to an SFA student.

The scholarship is specifically designed to assist students working toward a Master of Science in geology.

”It is an absolute honor to have been selected to receive this award,” said Jensen Angelloz of Hallettsville, ETGS Scholarship’s first recipient. “Many of the candidates are close friends who have excelled academically and are just as deserving to receive this honor. I hope to exceed the expectations of the scholarship committee with my future successes and eventually be in a position to give back to the ETGS and the Department of Geology at SFA.”

Angelloz was chosen for the scholarship because of his role as president of the American Association of Petroleum Geologists’ chapter at SFA, his role as captain of the Imperial Barrel Award team and the initiative he has undertaken to “improve himself and his fellow classmates,” said Dr. Wesley Brown, chair of the Department of Geology.

The scholarship will award $6,000 per year. Previous recipients must reapply to be eligible in following years.

“I want to use a portion of the scholarship to fund analysis for my thesis,” Angelloz said. “Weatherford Labs, a national rock and fluid analysis lab, has a wonderful imaging technology that can enhance the analysis of my samples. The technology is normally used by leaders in the petroleum industry to examine reservoir quality from well cores, making it relatively expensive to use as a student.”