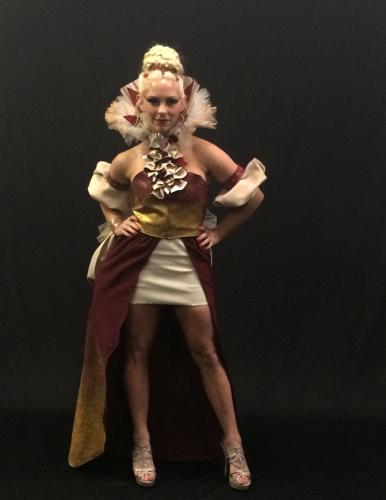 
NACOGDOCHES, Texas - After a few run-throughs on the 150-foot runway, Stephen F. Austin State University junior Meagan McNabb's nerves settled. Backstage was mayhem as designers, college students and make-up artists prepared to showcase their creations in front of hundreds of people. In a few moments, McNabb would walk down the runway and proudly display her team's Renaissance-inspired dress.

"I was a little nervous at first, but we were able to go through practice runs a few times, and I became more confident," McNabb said. "I think it went well and wearing the dress was really cool."

SFA students Jennifer Gregory, Laura Aguilar, Brittany Rathbun, Pamela Garcia and McNabb competed in this spring's challenge, which doubles as a learning experience and charity event. Proceeds from the event benefit the Houston Furniture Bank, a non-profit organization that provides a more comfortable and livable environment to families in need. This was the third year SFA participated.

"This was my first time participating in the event, and I really enjoyed it," Gregory said. "Being able to implement teamwork with my friends while representing SFA and helping raise money for those in need of furniture in the Houston area was an amazing experience, and I cannot wait for next year."

Gregory added working backstage and seeing the behind-the-scenes action was an eye-opening experience.

Product Runway puts teams of interior design and architecture professionals and interior design students in a fashion design competition where competitors are tasked with creating handmade garments out of standard architectural finish materials, such as glass, tile, carpet and wood. This year's theme was Avant Art, and teams had to create looks inspired by a specific art style, such as Renaissance, baroque, neoclassical and impressionism.

SFA team members created a Renaissance-inspired outfit with materials from Global Furniture Group and Formica. Per the competition's rules, 80 percent of the garment's design had to include one soft and one hard material.

SFA's team design was inspired by the Renaissance time period and the groundbreaking boldness of "Birth of Venus" by Sandro Botticelli, according to the team's concept statement. The look's concept was developed to depict the rebirth of an old Renaissance style to create a modern, edgy transitional dress using structured laminate by Formica while creating movement using a variety of fabrics, including Global's Imprint, Replay and Softhide. The design features confident reds, which show the empowerment Venus portrayed, and softer creams, which represent awareness of the natural world, to create a seamless transition into modern times, as explained in the concept statement.