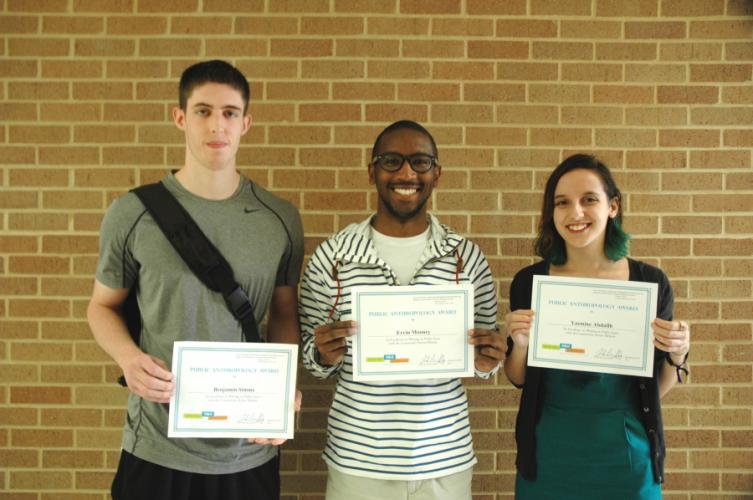 Three students in Assistant Professor of Sociology Dr. Karol Chandler-Ezell's cultural anthropology course at Stephen F. Austin State University recently received the Excellence in Writing on Public Issues Award from the Center for Public Anthropology's Community Action Website - a site designed to help students explore ethical issues of anthropology. "I really enjoyed being a part of the larger community and seeing everyone's different responses," said Yasmine Abdallh, right. Other students in the School of Honors cultural anthropology course who received the award include Benjamin Simms, left, and Ervin Mooney, middle. The students researched and reviewed case studies and journals focused on regulating human research before writing opinion editorial pieces. Students presented arguments on how Institutional Review Boards in the U.S. and/or Review Ethics Boards in Canada could enforce a set of common rules regarding human research. More than 38,000 students from 25 North American schools competed for these awards. "It was difficult for me to pick a side of the argument because there are researchers today trying to get meaningful research done but because of what others have done in the past, they've made it harder," Mooney said. "However, it was cool to try to weigh both sides and look at both perspectives." Simms said it was inspiring to be a part of a project that so many were involved in, and he felt humbled to be chosen for the award.