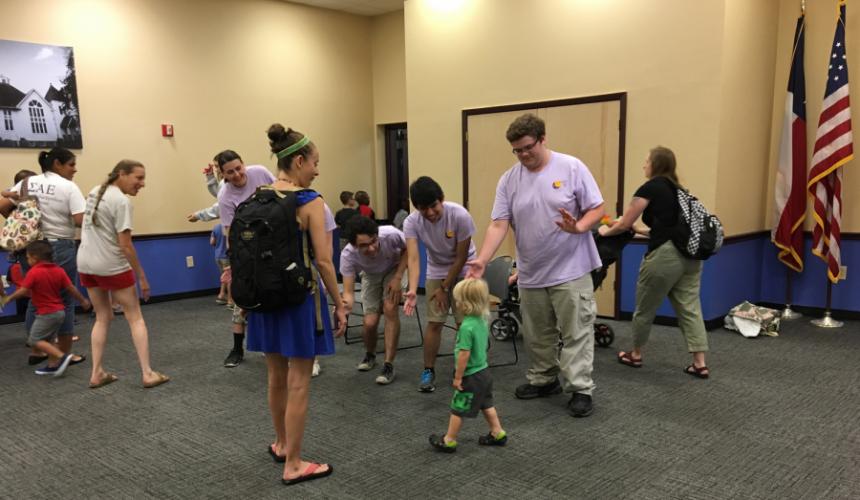 SFA theatre students interact with youngsters at the Judy B. McDonald Public Library when the students performed segments of the children's musical "A Year With Frog and Toad," one of this year's SummerStage Festival plays, which opens at 2 p.m. Friday, June 24, in W.M. Turner Auditorium on the SFA campus.


NACOGDOCHES, Texas - The 2016 SummerStage Festival at Stephen F. Austin State University is set to open Friday, June 24, with an afternoon performance of "A Year With Frog and Toad," a musical based on the children's stories written and illustrated by Arnold Lobel.

Written by brothers Robert Reale (music) and Willie Reale (book and lyrics), "A Year With Frog and Toad" follows the woodland adventures of two beloved suburban amphibians who leap to tuneful life. The irresistibly upbeat Frog lifts the spirits of his worrywart neighbor Toad, according to Angela Bacarisse, professor of theatre at SFA and director of the show. Music director is Tod Fish.

"A Year With Frog and Toad" provides valuable lessons regarding the importance of strong friendships, according to McAllen senior theatre major Pedro Dominguez, who plays the character Frog.

"Toad leans on Frog to get him out of some of bad situations," Dominguez said, adding that children will see how having a close friend can help every circumstance, even in the worst of times.

"They have their ups and downs," Bacarisse said of the relationship between the main characters. "You see them get frustrated or outright mad at each other, but they always come back together in the end."

Theatre students have been taking songs and scenes from "A Year With Frog and Toad" on the road to perform for children at area public libraries, including in Henderson, Mount Enterprise and Nacogdoches. During the academic year, Bacarisse works with the city's historic sites department in an outreach program in which theatre students portray characters from Nacogdoches' rich history during Storytime Saturdays.

"For me, it's all about exciting kids about reading," she said. "Here, they get to see a story brought to life - possibly one they have read. But if not, when they do read it, they will have a specific image to reference. If this sparks an interest in reading and the arts, then I have done my job."

The SummerStage Festival will also present "Picasso at the Lapin Agile," a hilarious play by actor, screenwriter and stand-up comic Steve Martin about an imagined meeting in 1904 between a would-be scientist called "Einstein" and an irresistible-but-unknown painter named "Picasso" in a Paris café called the Lapin Agile. Wit and whimsy fuel their talk of creativity and inspiration with the bistro's unforgettable cast of regulars until a very different kind of genius mysteriously arrives from the future. This play is recommended for mature audiences.