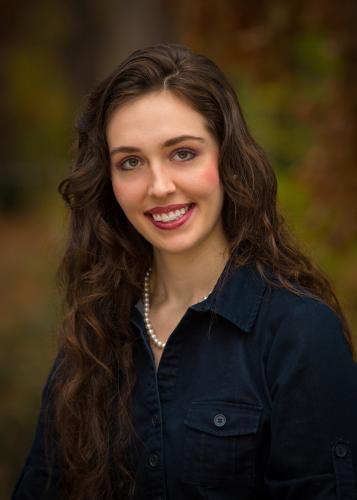 Continuing a tradition of excellence in the SFA School of Theatre, Easterling's selection represents the fourth time in seven years an SFA theatre student has been chosen for this prestigious award, according to Dr. Richard Jones, professor of theatre at SFA and advisor to SFA's Beta Phi cast of Alpha Psi Omega. Jones nominated Easterling for the award.

The scholarship, presented by the national office of the Alpha Psi Omega theatre honor society, is to be used to further a recipient's education and/or professional goals in theatre. The criteria are outstanding achievement in theatre work and academic performance, Jones said.

"It's very clear that the judges do indeed value both scholarship and versatility," Jones said. "Kathleen has been a model student (a perfect 4.0 GPA) and an active participant in our theatre program, both as an actor and as a costume designer, wardrobe master and stitcher. She interned in the costume shop at the Texas Shakespeare Festival in Kilgore last summer.

"Kathleen is one of those students you just want in your classroom or working on your show," he added. "She's always prepared; she always works hard; she is always professional and positive."

Dr. Bret Jones, Alpha Psi Omega's national business manager, said many impressive applications were submitted, and Easterling's "stood out." In notifying Easterling of her award, he wrote, "The selection committee was very impressed with the application materials submitted. You should be very proud of your accomplishments and of this recognition from the Alpha Psi Omega/Delta Psi Omega National Theatre Honor Society. Many fine applications were submitted, and yours stood out."

In nominating his student, Richard Jones wrote: "She's a solid actor, an excellent costumer in terms of both design and construction, and one of the top dozen or so scholars I've seen in a teaching career that began in 1979. To top it all off, she's universally liked as well as respected: when I say I've literally never heard a bad word about her from faculty or students, I do mean literally."

Easterling is a senior theatre major and music minor at SFA. As an SFA student, she has been involved with costuming, acting and singing. She has acted as wardrobe master for several shows, including "Trojan Barbie," "To Kill a Mockingbird," and "Alice in Wonderland" and the School of Music's opera presentations of "Gianni Schicchi" and "Suor Angelica," and, most recently, "The Bartered Bride." This past year, Easterling has fulfilled the roles of assistant costume designer for "The Arabian Nights" and co-costume designer for "Clybourne Park." She has also acted in theatre productions of "Blood Wedding," "Spamalot" and "Macbeth." She was also involved with the outreach program, The Fredonia Players. She currently serves as the co-historian of the Beta Phi cast and is the secretary-elect for next year. Outside of the university, Easterling will return this summer to the Texas Shakespeare Festival as a professional costume stitcher. She enjoys other artistic outlets, besides theatre and music, such as crocheting, baking, scrapbooking and drawing.

"Those of us who work with people like Kathleen every day already know this, but this is just one more indication that our students can absolutely compete with their peers at any other institution in the country," Richard Jones said.