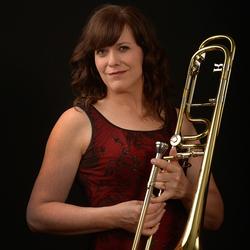 Among the program selections is “Sequoia” by Stephen Lias, professor of composition in the School of Music. The piece is among a series of works Lias has written in celebration of the 100th anniversary of the National Park Service. “Sequoia” was written for Scott and the SFA Trombone Choir. It premiered at the 2010 International Trombone Association Conference in Austin.

Also on the program is “Torque” by Justin Writer, associate professor of composition and music theory at the University of Texas, Rio Grande Valley. Scott described the piece as “very lively with lots of surprising rhythms, very fun and intense to listen to.”

“Tower Music” by Václav Nelhýbel is a standard literature for trombone choir, and Scott selected it for the program in anticipation of the restoration of SFA’s carillon set in the Griffith Fine Arts Building, which will be completed in January.

“I am very excited about the upcoming restoration of the carillon, and it made me think of this wonderful piece for trombone choir,” she said.