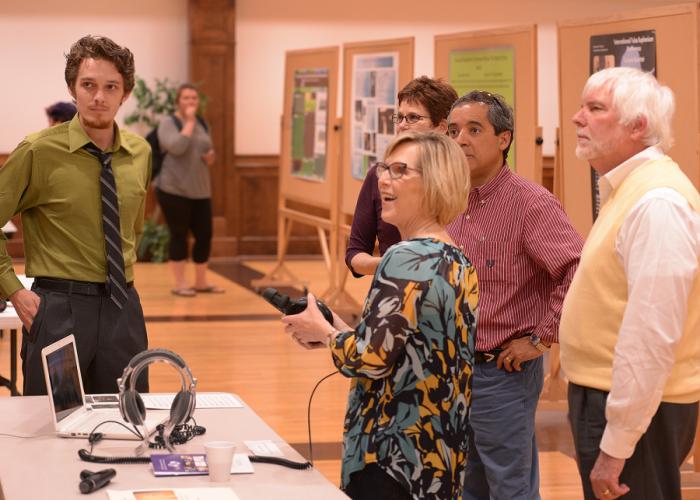 Attendees of SFA's 2016 Undergraduate Research Conference interact with and discuss "Recording a Polychoral Motet in a Cathedral Setting," a presentation by College of Fine Arts finalist Alexander Ballard, left. One undergraduate student research project from each SFA college was chosen as top scholar. Seven additional outstanding student research projects were selected from each college as finalists in the conference's ninth year.

"After conducting my research, presenting and talking to the public afterward, it was truly a transformative experience," Paige Sumney, senior general business major and the conference's first presenter, said following her presentation. "I know more about records management than I previously thought possible because of that experiential learning, and I learned from several audience members afterward that I'm rather articulate and portray confidence well."

Sumney was chosen as top scholar among the Nelson Rusche College of Business research finalists. She presented her findings of a records management experiential study she undertook at Ward Animal Hospital, a Nacogdoches veterinary clinic.

"Records management is a very continuous cycle and every business needs to learn ways to improve and preserve all the information they gather from customers," Sumney told the audience gathered in the Baker Pattillo Student Center Theater. "I was able to review Ward Animal Hospital's policies and procedures and wrote them their own personal SWOT (strengths, weaknesses, opportunities and threats) analysis, which I gave to them and identified areas they could improve in or were strong in. "

Marie Wilhelm, senior kinesiology major and top scholar from SFA's James I. Perkins College of Education, was second to present. She reviewed the results of her research on stress and stress management in kinesiology undergraduate students.

"Stress experienced by students contributes to poor academic performance, lack of motivation, obesity and chronic illness, so for these reasons, studying stress in college students is important," Wilhelm said. "Results indicated 'academics' and 'work' were the two main causes of stress reported by students."

"This was my first time to present at a conference. I was so nervous I wrote 'breathe' in my notes so I wouldn't forget," Wilhelm said. "Being chosen as top scholar is amazing - working on a project and then having your work recognized is an awesome feeling. I am humbled, honored and overjoyed. From this experience, I have gained confidence in myself as a speaker and as an academic."

Dr. Steven Bullard, SFA interim provost and vice president for academic affairs, and Dr. Eric Jones, associate professor of kinesiology and health science, introduced the top scholars before the conference's presentations and made a comment that resonated with Sumney.

"This is a transformative experience," she said. "Before I went to Ward Animal Hospital, I had only a vague idea of what records management actually meant. I hadn't yet created those connections between the classroom and the real world. The research was relatively easy because I had a great business leader, Cathy Hammond, to help me.

"The planning was a little difficult because I've never been an amazing writer," Sumney added. "It's something I've struggled with since I was little, and this was the longest paper I had to write at more than 13 pages, so you can imagine my anxiety. I did conquer it and wrote one of the best research papers that I'm proud of - even more so now."

All projects chosen by the URC executive committee, which includes Dr. Leslie Cecil, SFA associate professor of anthropology and chair of the Department of Anthropology, Geography and Sociology; Drs. Mark Faries, Eric Jones, Elizabeth Tasker-Davis and Michael Tkacik, were presented during the conference. All URC finalists presented posters in the Twilight Ballroom following the presentations.

"The purpose of this annual conference is to highlight and honor outstanding undergraduate research," Cecil said. "Students present on the paper or project they submitted, which must be completed during the previous calendar year and be faculty sponsored."

Now in its ninth year, the conference was created by SFA's College of Liberal and Applied Arts in April 2008. Twelve students presented in its first year.

"I'm proud of my fellow top scholars," Sumney said. "During rehearsal, we were nervous and all kind of leaned on each other for support and tips because they were our peers. Compared to the rehearsal, we all did so much better at the actual conference. Plus, I think that shiny purple plaque with our names and project names helped boost our confidence a bit."