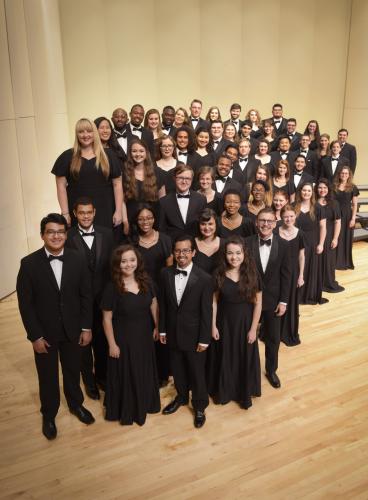 The A Cappella Choir at Stephen F. Austin State University will preview its spring Germany tour program when the ensemble presents its “Fall Concert” at 7:30 p.m. Thursday, Oct. 27, in Cole Concert Hall on the SFA campus.

Dr. Tim King, director of choral activities for the SFA School of Music, conducts the choir, which will preview music to be performed during the ensemble’s tour of Germany in May.

“The tour celebrates the 500th anniversary of the Reformation, which is perhaps the single most influential event ever to affect the course of musical history,” King said.  It is interesting to note that, even though separated by 200 years, Martin Luther and J.S Bach lived and worked in the same central Germany locale, King explained.

“The Germany tour and Thursday’s program feature both aspects – Luther, the reformer, and Bach, the eminent church composer,” King said.

The program features a contemporary version of the great Lutheran hymn tune “Wachet Auf Ruft Uns Die Stimme” by Hans Werner Zimmermann, a prominent church composer in his own right;  “Der Geist Hilft,” one of the most celebrated Baroque motets or anthems by J.S. Bach; and “Tristis Es Anima Mea” by Johann Kuhnau, who was Bach’s predecessor at St. Thomas Church in Leipzig, Germany.