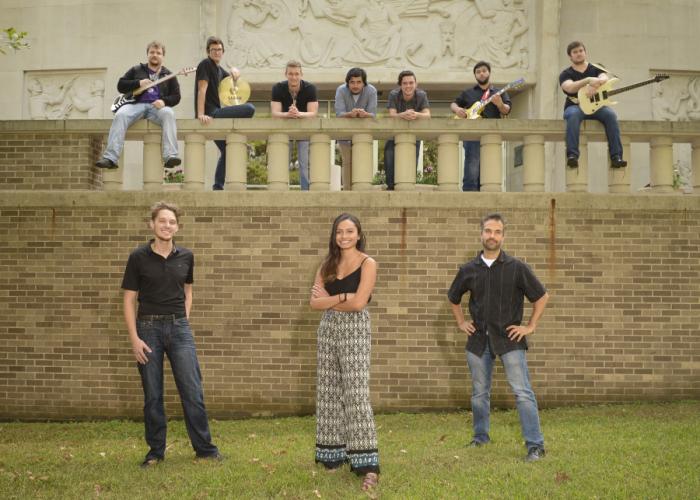 SFA’s Contemporary Ensemble will perform the music of pop icon Michael Jackson in a concert at 7:30 p.m. Saturday, Nov. 5, in Cole Concert Hall in the Wright Music Building on the SFA campus.

The ensemble’s purpose is to allow SFA music majors to “experience the many different functions of their instruments,” according to Andrew J. Sperandeo, SRT instructor and director/arranger for the ensemble.

Jackson’s music was selected as the theme of the program because he is considered the “King of Pop” who has influenced many modern day pop artists, Sperandeo said. Additionally, each of Sperandeo’s ensembles is studying only 1980s music this semester.

“I like to choose artists that incorporate different timbres and styles in order to expose younger students to different arranging possibilities as well expose them to an artist they would not normally even listen to on their own,” he said.

Most people recognize “Billie Jean,” written and co-produced by Jackson, as soon as the four-bar drum beat kicks in followed by the iconic repetitive bass line, Sperandeo said.

“It was interesting to find out that co-producer Quincy Jones had issues with this tune,” he said. “So much so, that it almost did not make it on the ‘Thriller’ album or at least not in its present form. Obviously, the issues were resolved, and it became one of Jackson’s most famous songs.”

“Human Nature,” written and composed by Steve Porcaro and John Bettis, was selected for the program because of its timbres, styles and half-time groove ballad, Sperandeo said. “Personally, when hearing it or playing it, I think the progression and grove allows the piece to have a lot of space to be creative and very musical,” he added.

The logical high-energy closer for the concert is Rod Temperton’s “Thriller.”

“I still remember the day this video hit MTV and how cool it was,” Sperandeo said. “One thing that is obvious about the late, great Michael Jackson is that he was a true innovator.  This video, specifically, was groundbreaking. It was essentially a 13-minute mini horror flick with a long, ghoulish dance breakdown in the middle. At the time, I was more into the heavy rock scene, but I still thought it was one of the coolest things ever.

“Hopefully some audience members will polish up their zombie ‘Thriller’ dance moves and show them off at the concert,” he added. “This concert will feature fun music, great times and dancing in the aisles. Come join the fun and sing along.”

Tickets are $8 for adults, $6 for seniors and $3 for students and youth. For tickets or more information, call the SFA Fine Arts Box Office at (936) 468-6407 or visit http://www.finearts.sfasu.edu/. Cole Concert Hall is located in the Tom and Peggy Wright Music Building.