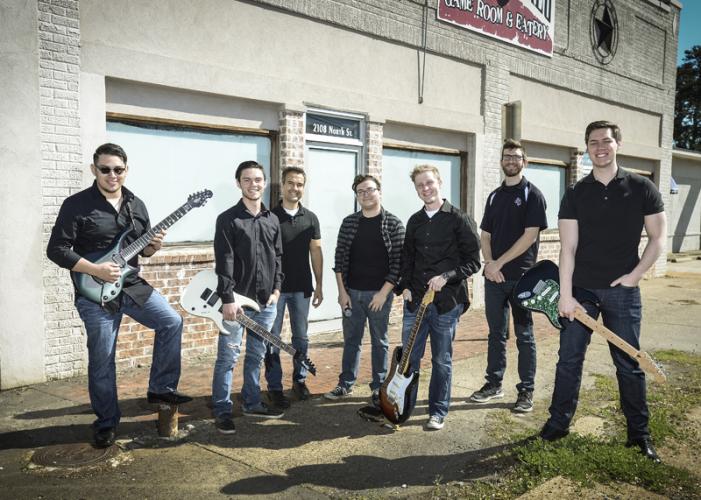 SFA's Contemporary Guitar Ensemble will perform the music of Jimi Hendrix in a concert at 7:30 p.m. Tuesday, April 12, in Cole Concert Hall on the university campus.


NACOGDOCHES, Texas - The Contemporary Guitar Ensemble at Stephen F. Austin State University will perform the music of American rock guitarist, singer and songwriter Jimi Hendrix in a concert at 7:30 p.m. Tuesday, April 12, in Cole Concert Hall on the SFA campus.

The ensemble features students in the SFA School of Music's Sound Recording Technology program and includes Gavan Maners of Rockwall, Nelson Privette of Winnsboro, Wesley Cortiaus of Friendswood and Kevin Montano of Pasadena on guitar, Austin Gehring of Missouri City on bass, Matthew Coronado of Irving on drums and Josiah Fling of Eagle Lake, vocals. Joining the ensemble as a guest artist is Lily Reyes of McKinney, vocals and percussion.

The concert will consist of all Hendrix music arranged for guitar quartet accompanied by a rhythm section consisting of drums and bass and fronted by two vocalists, according to Andrew Sperandeo, guitar instructor in the SRT program.

"Being a musician, especially for a guitar player, it is impossible to not to hear and see the influence of Jimi's playing and persona in so many other great artists and in so many genres over the years," Sperandeo said. "I deemed it pivotal that these young musicians get well acquainted as to why this is the case."

The program includes "Little Wing," one of Hendrix's most popular songs. It has become a standard, with interpretations, recorded by musicians in a variety of styles, Sperandeo said. It is ranked number 366 on Rolling Stone magazine's list of the "500 Greatest Songs of All Time."

"Crosstown Traffic" refers to Manhattan's traffic between the east and west sides, infamously known for its thick congestion. "With its hard rock riff, the song is an example and mixture of blues and acid rock," Sperandeo said.

The concert also features "The Wind Cries Mary," one of Sperandeo's personal favorite tunes by Hendrix. "My buddies and I used to love covering this tune in our teenage years," he said, "so of course, it was the first tune I arranged for this set."

The purpose for the guitar ensemble is to have guitar students experience the many different functions of their instrument, Sperandeo said. For example, many of the parts are written in horn section format similar to a big band where they play harmonized melodies, solis, etc. Students are also required to utilize different effects throughout the arrangements, "painting a certain sonic landscape," he added.