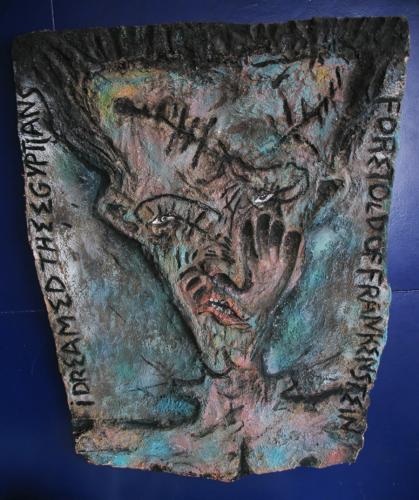 “I Dreamed…” a mixed-media piece created by artist Gary Frields, is one of several pieces that has been on exhibit throughout the fall semester in Stephen F. Austin State University’s Culinary Café. SFA will host a closing reception for Frields’ artwork from 4 to 6 p.m. Thursday, Dec. 8, in the Culinary Café, located in the Education Annex, Room 121, on the university’s campus.


NACOGDOCHES, Texas — Artwork created by Gary Frields, an artist and former Stephen F. Austin State University professor of art who passed away in 2013, has been on exhibit in SFA’s Culinary Café throughout the fall semester. A closing reception will be held for the exhibit from 4 to 6 p.m. Thursday, Dec. 8, in the Culinary Café, located in the Education Annex, Room 121.

Frields’ widow, Tamara Robertson, organized the exhibit that features Frields’ paintings, drawings, sculptures and digital artwork. A portion of the proceeds from artwork sold during the exhibit will benefit the Gary Q. Frields Art Scholarship, which is annually awarded to an SFA art major.

“Gary’s philosophy regarding art was open ended. He did not believe there was any one right way to begin an artwork or any one right style of art,” Robertson said. “To me, he was a Picasso.”

In his artist’s statement, Frields described his creative process as spontaneous and perceptive. He wrote, “I begin most works with no attempt to make any particular thing. I proceed relentlessly relying on emotional, intuitive reactions while exploring materials and responding as things happen that are not planned.”

The SFA and Nacogdoches communities are invited to attend the closing reception, and light refreshments will be served.