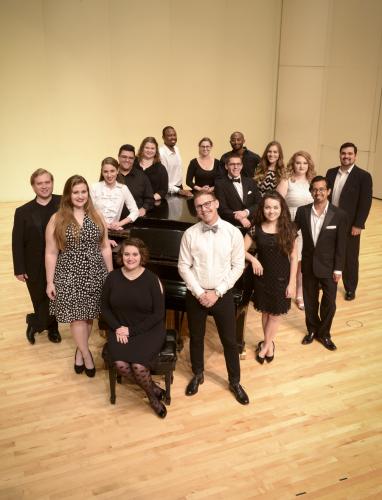 The Madrigal Singers at Stephen F. Austin State University will perform works by Harry Somers and Benjamin Britten when the ensemble performs at 7:30 p.m. Thursday, Nov. 10, in Cole Concert Hall on the SFA campus.

The SFA Madrigal Singers, under the direction of Dr. Tim King, director of choral activities in the SFA School of Music, is a highly select 16-voice ensemble comprised of members of the A Cappella Choir.

For its fall concert, the choral ensemble will perform “Five Songs of the Newfoundland Outports” by Harry Somers. King explains that for the drinking song, “Si j’avais le bateau,” Somers has added some “mouth” or “chin music,” in which the ensemble imitates instruments, in this case, trumpets and drums. In “The Banks of Newfoundland,” the women’s voices imitate cold breezes. “Chin music” appears again in the comic song, “The Old Mayflower,” while the well-known folksong “She’s Like a Swallow” provides a melancholy transition to the rollicking “The Feller from Fortune,” King said.

The program also features “Five Flower Songs” by Benjamin Britten, which are “beautiful part-songs that were written as 15th anniversary presents to Dorothy and Leonard Elmhirst, who were keen botanists,” King said.

“Whatever the reason, Britten composed a set of songs that has become one of his most performed, recorded and beloved compositions,” he said. “The set has wonderful imagery of the English countryside from the simple and serene ‘To Daffodils,’ to the dark and mysterious ‘Marsh Flower,’ and culminating with the fast-paced ‘Green Broom.’ These are sheer delight for both singer and listener.”

Through the Madrigal Singers’ many performances, especially during the Christmas season, their reputation reaches throughout the East Texas area, King said.

“However, it is their wide-ranging concert repertoire comprised of music from all musical periods – Renaissance to present day – that exhibits the group’s extensive talent, precision and artistry,” he said.