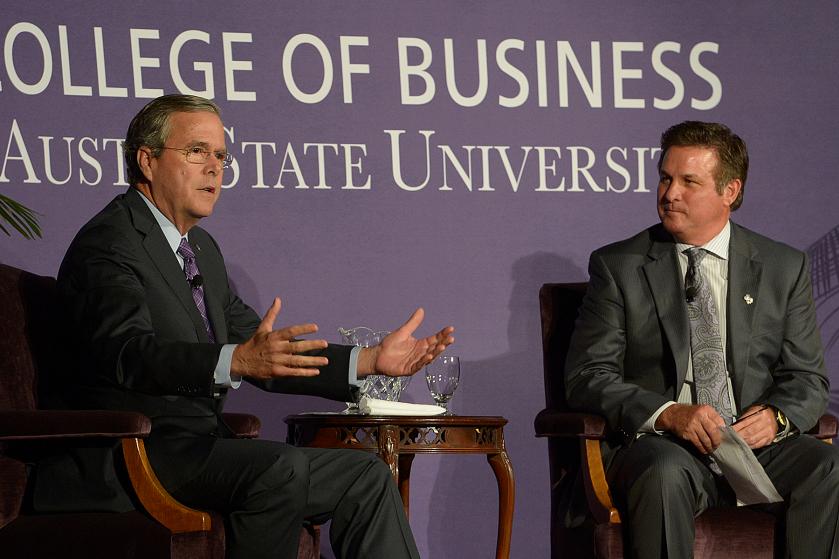 SFA's Rusche College of Business established the lecture series this year as a biennial event designed to bring scholars and business leaders to the SFA campus to discuss timely issues.

"The launching of the Nelson Rusche Distinguished Lecture Series is a special event for the college, especially as the series helps us advance our mission," said Dr. Tim Bisping, dean of the Rusche College of Business. "We are so thankful and appreciative of the generosity and foresight of Mr. Nelson Rusche in helping us make this happen."

In 2002, the college was named in honor of Nelson Rusche, whose gift endowed the college and provided scholarships for students majoring in business. His gift also supports other educational programs, including the lecture series.

"It was great to see the Grand Ballroom filled with people excited to attend the event," Bisping said. "There were many takeaways on assorted topics. For instance, the importance of hard work, perseverance and integrity were emphasized throughout. It would be hard to find better advice for future leaders."

Bush, Florida's first two-term governor, said his interest in politics stemmed from having a servant's heart and desire to solve problems.

"My interest in politics was to serve, and I was able to do that as governor of a complex state. It was eight years of incredible learning," Bush said. "I think we need to get back to campaigns being not the end but the means to get to a place where you can solve problems, help people who truly need it, change the direction of the country and unite people around shared values."

While governor, Bush and his administration focused on education reform and lowered taxes. He founded the nonprofit Foundation for Florida's Future, which joined forces with the Urban League of Greater Miami to establish one of the state's first charter schools.

"Try to live a life of virtue and meaning and leadership kind of comes naturally," Bush said. "Be courageous consistently. Try to show integrity. Be honest. That's the foundation for a successful life."

He also stressed having "dogged determination," being hardworking and having intellectual curiosity to be successful in life.

Earlier in the day, the college also hosted the SFA Leadership Summit, which featured a panel discussion with seven successful SFA alumni about leadership principles and business and corporate issues.

"The leadership summit was a great success. We were fortunate to be able to bring to campus a distinguished panel of accomplished alumni and have them interact with our students," Bisping said.

Panelists discussed their first jobs and mistakes they have made to help lend insight into building a successful career in business; advised students on leadership principles such as hard work, intellectual curiosity, discipline and communication skills; explained how they manage stress and balance their personal and professional lives; and reminisced about their most influential professors at SFA.

"The summit made available to our students, on a first-hand basis, insights from proven leaders regarding effective leadership," Bisping said. "As students work to develop their leadership skills, the insights provided by our panelists will serve as effective guidance."