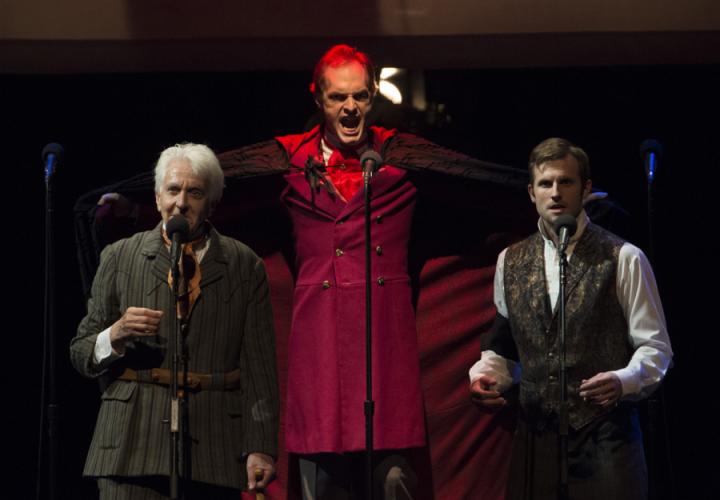 L.A. Theatre Works will present a live radio theater performance of Bram Stokers' "Dracula" at 7:30 p.m. Thursday, Feb. 4, in W.M. Turner Auditorium on the SFA campus as part of the College of Fine Arts' University Series. Photo by Matt Petit.

Part of the 2015-2016 University Series, this performance features the foremost radio theater company in the United States, according to John W. Goodall, associate dean for the College of Fine Arts. For more than two decades, LATW, under the leadership of Producing Director Susan Albert Loewenberg, has delighted audiences with its unique live radio theater-style performances in more than 300 small towns and major cities, including New York, Boston, San Francisco and Chicago.

"An L.A. Theatre Works performance is immediate, spontaneous, and features a first-rate cast, live sound effects, and a connection to the audience rarely felt in a traditional theater setting," Goodall said. "This theater… is an event."

This current tour of "Dracula" includes several actors with credits in the horror and suspense genre. The cast includes the well-known TV and film actor Nicholas Hormann who's been seen in dozens of television hits including "The West Wing," "Parks & Recreation"" Modern Family" and "Desperate Housewives." His numerous film credits include "Kramer vs. Kramer" and the early Oliver Stone horror film "The Hand." Hormann will play Dr. Van Helsing.

Veteran horror film actor Skip Pipo will play the role of Renfield. Pipo's long list of film and TV credits include B-movie favorites such as "The Janitor," "Sam Hell" and "Poker Run," as well as the television series "The Black Dawn."

The cast also includes Michael Kirby, who appeared in the horror film "Hell's Heart," Paul Culos, Graham Outerbridge and Alexis Jacknow, all up and coming TV actors, Summer Spiro, a star of the web series "Dabsity," and Patrick Wenk-Wolff, who has been seen on television in "The Last Ship," "Rizzoli & Isles" and "Life on Mars."

Prior to the performance, Zach Hanks, SFA assistant professor of theatre, will present a 7 p.m. informative talk in Griffith Gallery about the show style. The gallery is located across the hall from Turner Auditorium, which is located in the Griffith Fine Arts Building, 2222 Alumni Drive.

The audience is invited back to the gallery for a post-performance reception to meet the performers and to honor the event's corporate sponsor, Lehmann Eye Center.

SFA students may purchase Rush tickets for $3 during regular office hours starting Monday, Feb. 1. Students must present a valid SFA ID for purchase and at the door on event night.