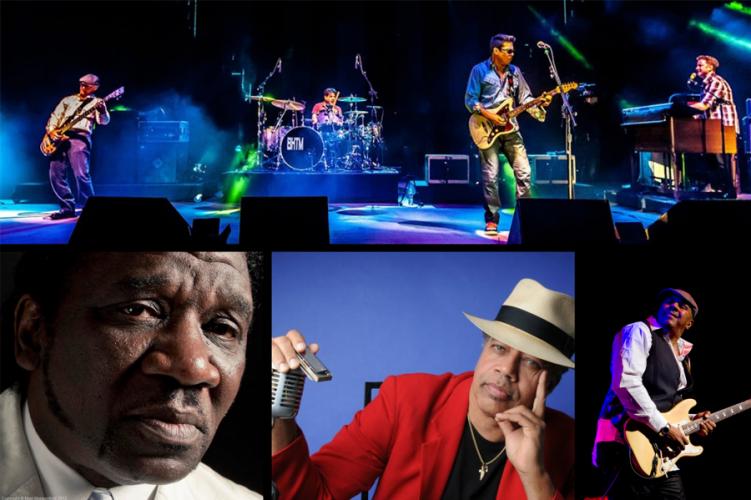 Big Head Todd and the Monsters lead the Big Head Blues Club, along with second-generation blues stars Mud Morganfield, Billy Branch, Ronnie Baker Brooks and Erica Brown, in performing a tribute to one of the most influential songwriters of early rock and roll entitled “Way Down Inside: Songs of Willie Dixon” in a College of Fine Arts’ University Series event at 7:30 p.m. Thursday, Oct. 13, in W.M. Turner Auditorium on the SFA campus.


NACOGDOCHES, Texas – As part of its 2016-17 University Series, the College of Fine Arts at Stephen F. Austin State University will present an exciting performance of the Big Head Blues Club at 7:30 p.m. Thursday, Oct. 13, in W.M. Turner Auditorium on the SFA campus.

The Big Head Blues Club featuring Big Head Todd and the Monsters with Mud Morganfield, Billy Branch, Ronnie Baker Brooks and Erica Brown will present “Way Down Inside: Songs of Willie Dixon,” a performance that pays tribute to “one of the pillars of modern blues,” said Scott Shattuck, associate dean of the College of Fine Arts and director of the series.

“Dixon was a Chicago blues artist, perhaps best known for his songwriting,” Shattuck said. “He has been called ‘the poet laureate of the blues’ and ‘the father of modern Chicago blues.’

“We anticipate this will be a very popular concert, with tickets going fast,” he said. “As soon as we announced this performance last summer, we began getting phone calls from members of Big Head Todd and the Monsters’ fan club. We expect it be a sell-out.”

Fans of Muddy Waters and Buddy Guy, or even Led Zeppelin and the Rolling Stones, have heard the songs of Willie Dixon. A Rock and Roll Hall of Fame inductee, Dixon was a key architect of the Chicago blues sound that many people say gave birth to rock and roll. By the time of his passing in 1992, Dixon had written more than 500 songs, including such immortal hits as “Bring It On Home,” “Spoonful,” “You Need Love,” “You Can’t Judge a Book by the Cover,” and “I Just Wanna Make Love to You,” many of which were covered by some of the world’s best-known arena rock bands.

As the Big Head Blues Club, platinum recording artist Big Head Todd and the Monsters along with Morganfield, Branch, Brooks and Brown, joined forces on the newly recorded album “Way Down Inside.” The Big Head Blues Club kicked off its U.S. tour Sept. 22, with back-to-back performance dates in major cities prior to and after the Nacogdoches show. The album will be available on the tour and online and is scheduled for national release in early 2017.

“Willie Dixon was a great writer, an incredible bass player, a great thinker and a beautiful guy,” notes Todd Mohr, lead singer and guitarist for Big Head Todd and the Monsters. “He tends to get overlooked because so much of what he did was behind the scenes, but he was definitely one of the most important songwriters in American music. He always professed that the blues is an accurate mirror of human life, and his subject matter ranged from politics to love songs and everything in between. So I'm excited to be able to tell more people about Willie Dixon with this project.”

Morganfield is the eldest son of Muddy Waters and recently released a Blues Music Award-winning album; Branch is a three-time Grammy Award-nominee who played harmonica in Willie Dixon’s Chicago Blues All-Stars band; and Brooks, son of Chicago blues master Lonnie Brooks, is an accomplished blues guitarist and bandleader in his own right. Denver-based blues artist Brown has worked with the band over the years.

This performance is sponsored in part by Lehmann Eye Center.

Prior to the performance, Dr. J.D. Salas, associate professor in the SFA School of Music, will present an informative talk about blues music at 7 p.m. in Griffith Gallery. The gallery is located across the hall from Turner Auditorium, which is located in the Griffith Fine Arts Building, 2222 Alumni Drive. The audience is invited back to the gallery for a post-performance reception to meet the performers and to honor the event’s corporate sponsor.