Story by Donna Parish and photography by Robin Johnson
•
January 5, 2016 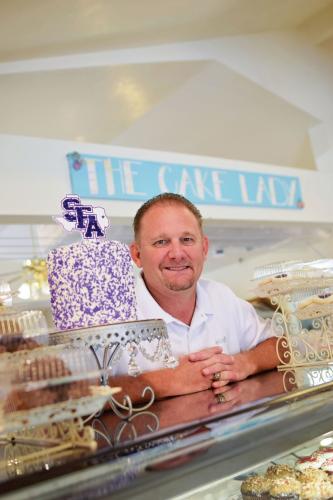 The smell of freshly baked goods fills the air at The Cake Lady Bakery in Friendswood. Owner Grant Girouard '91 took over the bakery after his mother, Rose, passed away from ovarian cancer in 2006. Rose started the bakery in 1981 to help fund her sons' college tuition. What started out as an in-home business has now grown into a thriving 5,000-square-foot facility with 25 employees.


Grant Girouard '91 learned a valuable lesson about baking from his mother, Rose, who founded The Cake Lady Bakery in Friendswood in 1981. Every confection the bakery produces must contain the precise measurements of flour, sugar, eggs, milk and butter. In addition, there is a special ingredient that his mother blended in to each item that made it stand out from other bakeries-love.

Although Rose passed away in 2006 from ovarian cancer, Grant has taken charge of his mother's passion and kept the bakery thriving. What started out in his mother's kitchen has now grown into a 5,000-square-foot facility that produces about 200 cakes on a busy weekend.

"The local high school home economics teacher offered a course in cake decorating, and my mother enrolled," Grant said. "The first decorated cake she made was for my youngest brother's birthday. It was decorated with a parrot, and I remember several of the attendees' mothers were so impressed that they asked mom to make cakes for their children's birthdays."

Word-of-mouth quickly spread, and before she knew it, Rose had acquired the name The Cake Lady. "My father worked in construction, and he converted our carport into a large kitchen, which gave mom much more room that allowed for additional ovens and larger coolers and sinks," Grant said.

Initially, Rose started the bakery to help pay for her three sons' college tuition and expenses. "My brother Jeff and I both attended and graduated from SFA, and Brent attended the University of Texas," Grant said. "Mom ran the bakery to support our education and make sure we got a good start in life."

After Grant graduated from SFA, he said he had about 90 days until the start of his first job, and his mother decided this would be a great time to take the bakery to the next level. "She set her mind on opening a retail business in a local commercial strip mall," Grant recalled.

So, Grant and fellow SFA alumnus Chris Hudman completed the build out on the new location, and the bakery was incorporated at that time.

Grant said after working in the real estate business for a few years, he found himself looking for a career change. While he was exploring other opportunities, he started helping his mom at the bakery.

"She was really growing the business and had three employees working alongside her," Grant said. "She had her hands full just trying to keep up with the demand for her products."

Shortly thereafter, the business next to the bakery closed, and that space became available for lease. "We jumped on the opportunity to expand the bakery once again and doubled its size," Grant said.

With a much larger space came the opportunity to purchase additional equipment. A new oven that held 18 sheet pans, a walk-in cooler and freezer, larger three-compartment sinks, several commercial mixers, bakers' racks, and other items were purchased. "I traveled to various auctions and bought most of the items at a fraction of what they would have cost us new," Grant said.

Just a few years later, the business again began to outgrow its location, and the search was on to find a bigger storefront. In 2000, the company purchased a building in Friendswood that the business now calls home.

Rose continued to run the bakery with Grant's assistance. She was elected president of The Greater Southwest Retail Bakers Association in 2003, and shortly thereafter, she was diagnosed with ovarian cancer. As the disease progressed, Grant took over the day-to-day management of the bakery.

"It was a challenge for me because up until that time, I wasn't very involved in the creative side," Grant said. "I handled the payroll, accounts payable, marketing, upkeep of the equipment and ordering supplies. I had to shift gears a little and hire bakers who could fill the void."

After Rose passed away, Grant purchased Brent's shares in the bakery, and Grant has been the sole owner since 2014.

A typical day begins around 5 a.m. Employing 25 full- and part-time employees who are all cross-trained, the bakers begin by measuring, mixing and baking the day's pastries, cakes, cookies and pies. The decorators follow by adding their artistic touches to meet the customers' specifications.

"Our core business is party cakes," Grant said. "Birthdays, showers, corporate events, weddings and groom's cakes are our specialties, but we're also well-known for our cutout cookies and homemade pies. We don't make doughnuts, but we do offer kolaches and cinnamon rolls on Saturdays," he said.

Of course, the holidays are an extremely busy time. Grant said the week of Thanksgiving, the bakery usually makes about 500 pies, and during the weeks leading up to Christmas, the staff will bake and decorate hundreds of custom-made gingerbread houses, as well as thousands of decorated cookies.

Although owning a bakery and being around the delicious aromas could be tempting for most people, Grant said he actually lost 15 pounds when he initially started helping his mom. "The kitchen gets hot, and it's hard work," he said. "I do like cakes and cookies, but when you're around the smell of freshly baked goods all day, you become a little numb to it."

For Grant, the recipe for success began with his mother's love for her children and her desire to help put them through college while also doing something she loved. "We still use many of mom's recipes," Grant said. "Whenever I'm in the kitchen, I think of her."