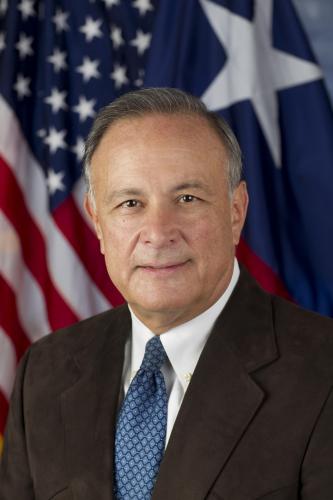 Texas Secretary of State Carlos H. Cascos will serve as the East Texas Historical Association's 2016 Georgiana and Max S. Lale Lecture featured speaker. The lecture will begin at 7 p.m. Oct. 13 in the Baker Pattillo Student Center Grand Ballroom on the Stephen F. Austin State University campus. The lecture is free and open to the public.

The 20th annual Lale Lecture will begin at 7 p.m. Oct. 13 in the Baker Pattillo Student Center Grand Ballroom on the Stephen F. Austin State University campus. The lecture is free and open to the public.

"It is only appropriate that Secretary Cascos speak at this university since the first Texas secretary of state appointed by an elected officer of Texas was Stephen F. Austin," said Dr. Scott Sosebee, SFA associate professor of history and executive director of the ETHA. "The East Texas Historical Association is honored to host Mr. Cascos."

A native of Brownsville, Texas, Cascos was born in Mexico and became a U.S. citizen in his adolescence. After his education in Brownsville public schools, he attended college and received a degree in accounting. After becoming a certified public accountant, he embarked on a distinguished career in the private sector.

Cascos is a partner in the Waco-based accounting firm Pattillo, Brown & Hill, as well as a member of the American Institute, Texas Society and Rio Grande Valley Chapter of Certified Public Accountants. In addition, he is a past member of the Association of Government Accountants and the American College of Forensic Examiners.

Cascos entered public service as a member of the Texas Public Safety Commission. He then served as a Cameron County commissioner from 1991 to 2002 before being elected Cameron County judge in 2006. He was re-elected to that position in 2010 and 2014. He became the Texas secretary of state in 2015.

Sponsored by the ETHA, the Georgiana and Max S. Lale Lecture Series is made possible through a generous grant from Max Sims Lale, a notable East Texas journalist, author and historian.