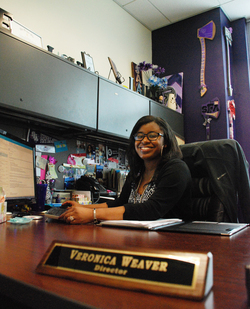 NACOGDOCHES, Texas - Sitting in a purple room with purple axe handles pinned above her desk, Veronica Weaver talks about her decade-long transition from student to orientation supervisor and, just this year, to head of the Stephen F. Austin State University Office of Multicultural Affairs.

"OMA was what I expected as far as the programs it hosts," said Weaver, the campus organization's new director. "What I wasn't expecting is just how passionate the students would be about everything - politics, social justice. I also underestimated the power of the community and its support of OMA events."

A native of Longview, Weaver began at SFA as a student in 2005. She graduated four years later with a bachelor's degree in biology with the goal of becoming a physical therapist before "converting," she chuckled.

"During undergrad, I worked as a physical therapy technician in the mornings and then as an orientation leader in the afternoons," Weaver said. "But I was finding that I was loving going to orientation but wasn't so excited to go to the hospital every day. And that's no one's fault, I just had more passion to help students."

Weaver accepted a supervisory job with SFA orientation soon after graduation. She went on to study educational leadership at SFA and graduated with a master's degree in that field in 2011.

Through orientation, Weaver had worked with OMA staff on projects, such as the Dr. Martin Luther King Jr. Day of Service and various diversity presentations, among others. The directorship wasn't a thought in her mind until she heard former OMA director Dr. Osaro Airen had accepted a job in Dallas earlier this year. Airen had been in the position for approximately three years.

"Osaro made the announcement to leave, and when the position opened, there was an opportunity I wasn't expecting," Weaver said. "It's just funny how life throws things at you."

The transition has been a pleasant surprise. While still able to use the same passion for helping others that prompted her interest in physical therapy, Weaver is excited to make a difference in students' lives.

"I had to think first about whether I wanted to cross over into multicultural affairs and then assess what the needs were and if I could add to it," she explained. "I'm very happy I made the decision. Switching over has been really exciting."

As Weaver settles into her new role, she is eager to continue making a name for the organization not only on campus but in the Nacogdoches community as well.

"I started sending out emails regarding our upcoming events, and the number of people who responded was wonderful," Weaver said. "I value everyone's time. I believe you can dedicate your time to anything you want, but to go out of your way to take your family to OMA events means a lot. And I attribute a lot of that community outreach to Osaro. I think he had great ties in the community."

Weaver began assessing the OMA's future and the organization's goals the moment she began as director. Her main focus is branching out to draw in a bigger student base.

"I do want to have programs that appeal to every demographic here at the university," Weaver said. "That's Asian American, Native American, African American, Caucasian - everyone. My other goal is focusing on getting students engaged, especially with under-represented populations. If you look at the research, they are the ones falling behind in retention. My goal is to get them in here and engage them. I'm a big advocate about that."

Ultimately, Weaver hopes that every person in the SFA and Nacogdoches communities will hear the acronym OMA and immediately know what the organization offers.

"Osaro did an amazing job building relationships, so I want to keep those relationships going and get to know the community," Weaver said. "It's going to take a couple years, but the foundation is there, so we will just continue to build on it."