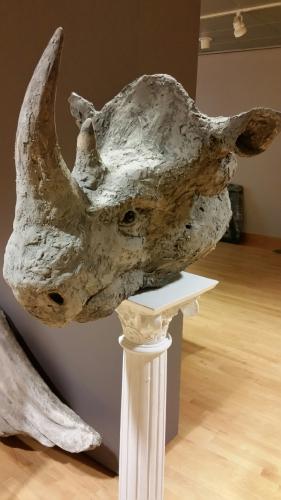 The works of the late SFA art professor Gary Frields will be featured in a show and sale that runs Aug. 4 through 27 in Reavley Gallery in The Cole Art Center @ The Old Opera House. A portion of the proceeds will benefit the Gary Q. Frields Art Scholarship awarded annually to an SFA student.


NACOGDOCHES, Texas - The "artful spirit" of Gary Frields will again be made available to admirers of the late Stephen F. Austin State University art professor when The Beautiful Gary Q. Frields Art Show & Sale takes place Aug. 4 through 27 in Reavley Gallery of The Cole Art Center @ The Old Opera House in downtown Nacogdoches.

A reception is scheduled for 6 to 8 p.m. Friday, Aug. 12, hosted by the SFA Friends of the Visual Arts. Half of the sale proceeds will benefit the Gary Q. Frields Art Scholarship the FVA awards annually to an SFA student.

It's been three years since Frields passed away, and his wife, Tamara Robertson, decided it was time to allow the public an opportunity to enjoy his artwork once again.

"I want Gary's artful spirit to continue enriching other people's lives as he did while on this earth," she said, "making them laugh, making them stop and contemplate the incredible beauty of the world and what it means to be a sentient being."

"I had the privilege of knowing Gary for nine years in total before he passed away, and the even greater privilege of being his wife for his last three years," Robertson wrote in an email interview. "I have held his artworks close to me for these three years since he passed, unready to part ways with important things of his.

"It has made me sad to know so much of his work sits, unappreciated, as I have only so much room for display," she said. "It is time to remedy this situation and release the beauty of Gary's persona back out where it belongs - in public."

Frields' best friend, Michael Donahue, described him as "an art evangelist," Robertson said. "Gary was filled with gratitude to be able to live an artful life, create art and share his passion for art, UFOs, Elvis and Mr. Peanut with his friends and students," she said.

Frields' philosophy regarding art was "open-ended," she explained. He did not believe there was any one "right" way to begin an artwork, or any one "right" style of art, or even that an artist was confined to creating work in one style alone.

"To me, he was a Picasso," she said. "He began most of his art with no attempt to make any particular thing, but would proceed relentlessly, relying on intuitive reactions to his chosen material. While exploring various (and often new) materials, he would respond as unplanned things happened in his process of discovery. The forms, images, and narratives revealed would seem to invent themselves almost independently of Gary in an open-ended process that could merge any style (classical, minimal, expressive, nonobjective, naïve, abstract, etc.) with aspects connected to his life. Discoveries made during his working process built trust in creating through this working method."

Each of Frields' artworks has a different message, Robertson said. "Sometimes it is silly, sometimes serious, sometimes he was simply expressing his passion for life. There is certainly something in his work for everyone to connect with, regardless of their level of art education."

Frields was "sincerely touched and proud" when the FVA announced it would honor him with a scholarship in his name, Robertson said.

"He was thrilled he would still be able to continue to encourage students of art even after he was no longer a teacher in the classroom," she said. "Gary was always a champion of his students and took every opportunity to give back to the arts. He was an ardent believer that art would allow and encourage students to become more informed and transformed into authentically original, creative, open-minded, charitable individuals."

"Scholarships advance a student's self-belief and cognizance that their rigorous effort to acquire knowledge and skill is rewarding and respected," Frields wrote. "I hope this scholarship allows someone to follow their passion and live their dream as I have been so fortunate to have done."

The Cole Art Center is located at 329 E. Main St. Reavley Gallery is on the second floor. At the close of the show, the remaining artwork will be moved to the Culinary Café on the SFA campus.