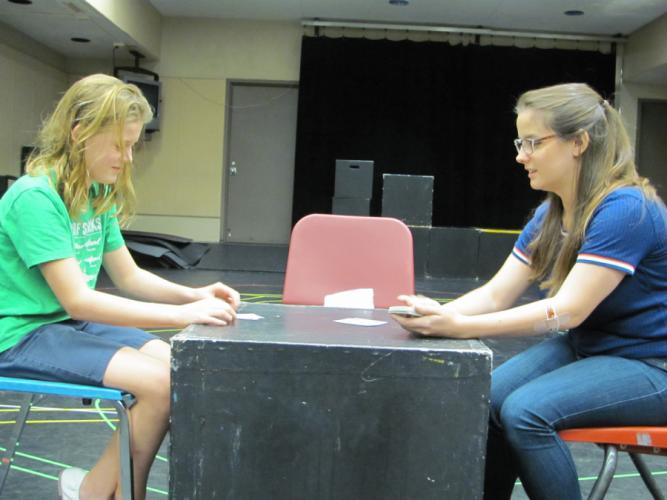 Guest actor Mae Johnston, 12, in the role of 7-year-old Josie, and SFA theatre student Maggie Strain, in the role of Mrs. Kilbride, rehearse a scene from Marina Carr’s “By the Bog of Cats.” The SFA School of Theatre’s production of the Irish play runs Nov. 15 through 16 at 7:30 nightly in W.M. Turner Auditorium.


NACOGDOCHES, Texas – In many ways, Mae Johnston is a typical sixth-grade student. She plays the drums in her school band, and she’s on the swim team. She plays piano, watches YouTube and listens to music. She enjoys playing video games on her phone, and she loves Pinterest, “because Pinterest is best.”

Most of her friends are guys, because “you know, guys are less drama,” she said.

Her interest in the theatre and acting was sparked when she began attending Junior Jacks summer theatre camp at Stephen F. Austin State University and garnered the leading role in a play her first year.

“It was really fun, and I loved doing that,” she said.

Her performance skills caught the eye of camp director CC Conn, associate professor of theatre at SFA, and of the theatre students who worked with Mae during the camp. As a result, Dr. Rick Jones, professor of theatre and interim director of the School of Theatre, cast Mae, 12, in the role of 7-year-old Josie Kilbride in Marina Carr’s “By the Bog of Cats,” which Jones is directing as part of the SFA School of Theatre’s 2016-17 Mainstage Series.

The Irish play is loosely based on Greek mythology’s Medea legend. It opens with the play’s protagonist and Josie’s mother, Hester Swane, receiving prophecies at dawn that she will die before dusk on the very day her former common-law husband and father to her daughter is to marry a younger and wealthier woman. The play tells the story of that day.

Although Mae doesn’t have the experience or maturity as her college-age counterparts on stage, she is “remarkably intelligent” and she has “a good handle on things,” Jones said, including the violence contained in the play’s storyline.

“This is an adult play, and death is involved in the plot,” he said. “Someone Mae’s age – and as smart as she is – can understand and handle that.”

Jones has made a few rehearsal adjustments as a result of working with a younger cast member.

“Our rehearsals are at night, and we want to get her out in time for bedtime, then the rest of us have another hour-and-a-half in rehearsal,” Jones said. “It’s not a big deal, but it is something we have to work around. We need her to get enough sleep and be able to do her homework. My standard practice is to rehearse on Sunday night, but it’s a weekend, so we rehearse on Sunday afternoon. We’re making those kinds of accommodations.”

“She persists with everything,” she said. “Her mother is basically everything she cares about. She’s made friends with people in the Bog, and she seems to be the only child there.”

Mae is looking forward to attending Junior Jacks again next summer, and she hopes to eventually take drama classes in school. But, for now, her focus is getting ready to perform “on a big stage” in “By the Bog of Cats.”

“I like being in front people; I can talk for hours,” she said. “I love the feeling of being on a stage in front of a ton of people.”