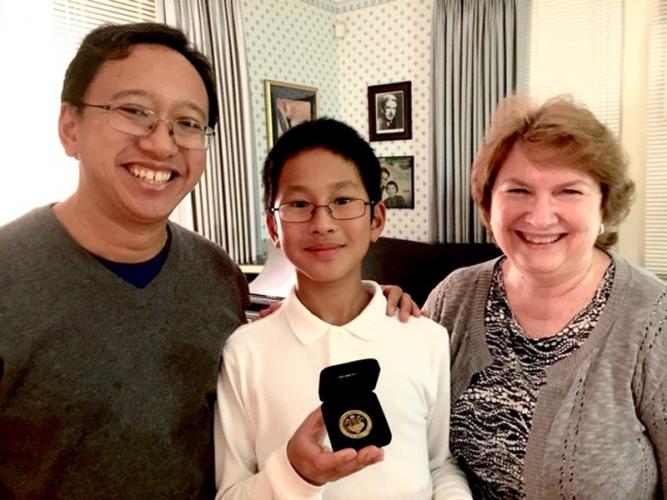 Young pianist Antonio Ajero displays the medal he earned from the Royal Conservatory Music Development Program after scoring the top mark in the nation on the Level 9 Piano assessment. He is pictured with his Music Preparatory Division teacher, Linda Parr, and his father, Mario Ajero.


NACOGDOCHES, Texas - Eleven-year-old Nacogdoches pianist Antonio Ajero has been awarded a National Gold Medal from the Royal Conservatory Music Development Program, earning him the status of being the only Texas resident to garner this prestigious prize.

A recent student of Linda Parr in the Music Preparatory Division of the Stephen F. Austin State University School of Music, Antonio scored the top mark in the nation on the Level 9 Piano assessment.

"Last May I was asked to take Nio as a student just a couple of weeks before his piano exam and coached all of his repertoire as time allowed, so I was quite excited to hear the fabulous news," Parr said of the accomplishment. "I have not had a student in the Royal Conservatory Music Development Program before, and I am getting introduced in a very big way."

Although the program is nationally and internationally established, Parr explained that it is not as familiar to teachers in the East Texas area as are Music Teachers National Association or National Guild of Piano Teachers assessments.

"The amount of daily practice that Nio has dedicated to technique, repertoire, score sight-reading, theory and aural skills, improvisation, reading and comprehension of music is astounding," Parr said.

Although he recently became a student of Parr, from the age of 3, Antonio has studied and performed regularly with his father, Mario Ajero, who is associate professor of piano pedagogy at SFA.

"This National Gold Medal from The Royal Conservatory is certainly the most prestigious recognition that Antonio has received for his musical accomplishments," Ajero said. "I was informed by The Royal Conservatory that close to 100,000 students were assessed this year across all levels and disciplines in North America. For Antonio to achieve the distinction of earning the highest Level 9 Piano score in the entire country is really unbelievable to me, because I would be proud if any of our high school students or even some college students just passed this exam, let alone get the highest mark.

"For him to achieve this at age 10 when he took this assessment is incredible," he added. "But I've seen how much preparation, practice and time that he's devoted to reaching this distinction. So at the same time it does not surprise me to a degree. For Nio to be recognized as the top piano student from one of the most prestigious music institutions in North America certainly affirms that we are doing something special and is personally satisfying for me as a parent."

Parr complimented Ajero for his guidance and positive influence on his son's musical interests and resulting accomplishments.

"He has nurtured and implemented all of this with both Nio and his sister Olivia from a very early age, and the arts are being completely integrated into the children's daily routine," she said. "I commend the Ajero family on establishing a busy, but well-balanced routine of school and music studies, exercise, social networking and healthy, happy family time."

"We've been very fortunate to have Antonio grow up in this wonderful musical environment and listen to performances from faculty, students and guest artists," Ajero said. "At the same time, all the recitals that he's participated in over the years have helped prepare him for moments like this. I look forward to seeing his lessons with Linda Parr take his musicianship to another level."

Since the RCMDP audition, Antonio has and continues to study additional repertoire of J. S. Bach, Beethoven, Schubert, Chopin, Albéniz, Debussy, Paderewski, Bartok and others. He played in a long-distance master class with Dr. João Paulo Casarotti in Brazil, was a winner in the 2015 Red River Radio Young Artists competition, collaborated with young violinist Yassia Felts, gave a full solo piano recital in November, and was recently invited to perform for a new music festival in Alexandria, Louisiana.

Antonio will work to complete Level 10, which will allow him to test for an associate diploma in piano performance from the conservatory. Most of the necessary theory and music history skills for this endeavor will continue to be encouraged, taught and monitored by his father.

For information about the Music Preparatory Division of the SFA School of Music, visit www.music.sfasu.edu/prep or contact Director Pat Barnett at (936) 468-1291.