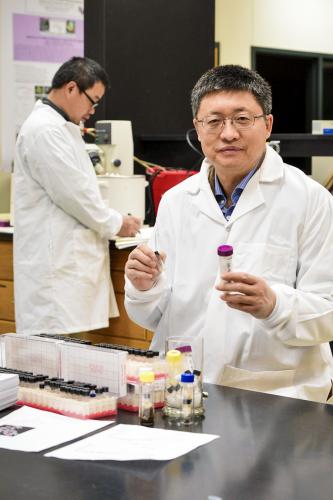 A team of researchers, including Dr. Shiyou Li, pictured, research professor and director of the National Center for Pharmaceutical Crops at Stephen F. Austin State University, recently received a U.S. patent for Salviniol, a compound derived from the invasive giant salvinia plant. Lab trials conducted at the NCPC show Salviniol can slow and, in some cases, completely inhibit the growth of a wide range of cancer cells, including pancreatic and lung cancer cells.


NACOGDOCHES, Texas — A plant many consider destructive may have just redeemed itself by offering promise in fighting cancer.

The researchers' work has recently led to a U.S. patent for an anti-cancer compound, Salviniol. Lab trials conducted at the NCPC verify Salviniol can slow and, in some cases, completely inhibit the growth of a wide range of cancer cells, including pancreatic and lung cancer cells.

"People often turn to tropical locations to search for medicinal compounds, but that requires a lot of money and resources," said Dr. Shiyou Li, research professor and director of the NCPC. "Instead, we turned to a native and invasive species in our own backyard."

During the past two decades, Li and SFA research scientists Guangrui Deng, Zushang Su, Ping Wang and Wei Yuan have isolated more than 2,000 chemical compounds from roughly 1,300 species. Many of these compounds are currently undergoing rigorous lab trials to verify their pharmacological potential.

In the quest to isolate potential anti-cancer compounds, Li and his team also made a revolutionary breakthrough in the control of invasive species. Endogenous biocide, or endocide, is a concept developed by Li that refers to the chemical compounds within a species that, when exposed, have biocidal effects on that species. Moreover, these biocidal effects are species specific, meaning surrounding unrelated species are not negatively affected.

While this concept initially focused on giant salvinia, research has shown that the endocide concept can be used to control numerous other plant and animal species, including fire ants.

"This is the most amazing thing I have seen in my career," said Dr. Steve Bullard, SFA provost and vice president for academic affairs. "The science community is not fully aware of Dr. Li's work yet, and that is why it is so important to protect this intellectual property through patents."

The NCPC also is collaborating with the MD Anderson Cancer Center in Houston to investigate how anti-inflammatory compounds in turmeric, an herbaceous perennial plant, can be used in cancer treatment.

The NCPC, formerly known as the Center for Medicinal Plant Research, was established in 2004 through U.S. congressional appropriations and has received support from former U.S. Sen. Kay Bailey Hutchison and U.S. Congressman Louie Gohmert. Its primary mission is improving human health through the discovery of novel anti-tumor and anti-viral agents from native and invasive species.

Li said that both the offices of Hutchison and Gohmert provided invaluable support during the past 20 years, and as his research moves forward, he hopes to develop new partnerships and investors to further the center's mission.

Visit forestry.sfasu.edu/ncpc to learn more about the NCPC.