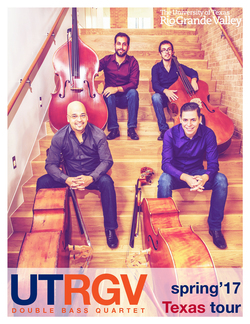 NACOGDOCHES, Texas - The University of Texas Rio Grande Valley's Double Bass Quartet will present a master class and will perform at 1 p.m. Saturday, April 29, in the Music Recital Hall on the campus of Stephen F. Austin State University.

The quartet is UTRGV's most recently formed ensemble, and it is in residence at the university's Edinburg campus. The ensemble includes undergraduate students Andrés Vela and Daniel Morehead and graduate student Gabriel Preusse, all of whom have collected accolades and awards for their performances at the state, national and international level. Their professor, Dr. George Amorim, leads the ensemble.

Since its formation, the UTRGV Double Bass Quartet has performed in venues throughout the Rio Grande Valley, as well as in New Mexico and El Paso. In September, the quartet had its international debut in Prague, Czech Republic, when it performed as a featured ensemble at the 5th European Double Bass Congress, receiving enthusiastic reviews.

This spring, the UTRGV Double Bass Quartet has appeared throughout the state and abroad, culminating with a performance at the International Society of Bassists Convention in Ithaca, New York, scheduled for June. On the fourth week of April, the quartet will tour Texas. The tour includes the performance at SFA.

The quartet will present Sergei Prokofiev's "Peter and the Wolf," a tale of the adventures of a brave little boy. Originally written for orchestra, the piece will be in a skillful adaptation for double bass quartet by Justin Writer, composition professor at UTRGV. The second large work of the program features "Afro Sambas" by the icons of bossa nova, Baden Powell and Vinicius de Moraes. Brazilian bassist Preusse arranged this work. Another piece in the program is "The Mysterious Color of Vampire Sleet at the Moment When Light Becomes Wine" by Austin-based P. Kellach Waddle.

Admission is free. The Music Recital Hall is located in the Tom and Peggy Wright Music Building. For information, call the SFA Fine Arts Box Office at (936) 468-6407 or (888) 240-ARTS or visit www.finearts.sfasu.edu.