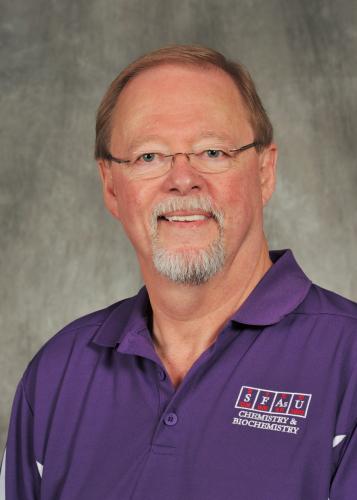 Moore served SFA for 46 years in various roles, including lab coordinator, assistant professor, associate professor, professor, and interim chair for both the chemistry and biology departments. During his tenure, he also helped establish the Teaching Excellence Center and served as its director for eight years.

Dr. Michael Janusa, professor and chair of the Department of Chemistry and Biochemistry at SFA, said Moore has been a major influence within the College of Sciences and Mathematics.

“Through the years, Dr. Moore has contributed to the important mission of teacher preparation, and he has affected the overall quality of teachers in kindergarten through 12th grade and the quality of education for young minds,” Janusa said.

As a passionate educator, Moore academically challenged his students to foster critical-thinking skills.

“I tried to ensure that each of my students had the opportunity to develop the critical-thinking skills that allowed them to be successful in the area of chemistry,” Moore said. “I maintained high academic standards and tried to facilitate my students' learning.”

He was named the 2008-09 Regents Professor, which is the highest honor SFA may bestow upon a faculty member. Additionally, he was awarded the SFASU Foundation Faculty Excellence Award in Teaching in 2006 and the Teaching Excellence Award for the College of Sciences and Mathematics in 2002.

“Dr. Moore’s dedication to teaching and SFA is evident by the numerous teaching accomplishments he has achieved during his career at SFA, which is particularly distinguished by his work in science education,” Janusa said. “His knowledge has been shared across the world, and his achievements have brought honor to SFA, the College of Sciences and Mathematics, and the Department of Chemistry and Biochemistry.”