Dr. Peter Csanyi to serve as 2017-18 Fulbright Scholar-in-Residence at SFA 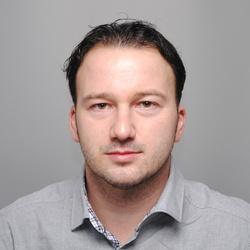 Dr. Peter Csanyi, vice chair for international relations and international projects and Erasmus+ program coordinator in the Department of Political Science at Alexander Dubcek University of Trencin, Slovakia, is serving as the 2017-18 Fulbright Scholar-in-Residence at Stephen F. Austin State University.

The Fulbright Scholar-in-Residence program assists U.S. higher education institutions in expanding the program of academic exchange by supporting non-U.S. scholars through grants for teaching at institutions, according to the Fulbright website. Csanyi will spend a year teaching and researching in the U.S.

“When I received approval to be a Fulbright Scholar-in-Residence, it was some of the best news in my life. It is recognition of my work, but also a big challenge and commitment toward students and colleagues at SFA,” Csanyi said. “I am very thankful to Dr. Michael Tkacik as well as all his colleagues, who were involved and worked hard to bring me to SFA.”

Tkacik, director of SFA’s School of Honors, has played an instrumental role in facilitating Csanyi’s visit to Texas. SFA’s departments of government and history also were central to supporting this visit.

“It’s not often that SFA has the opportunity to host a person like Dr. Csanyi,” Tkacik said. “I’m looking forward to his visit and believe he will teach us a great deal.”

Originally from Slovakia, Csanyi has lived in Vienna, Austria, for more than six years and is no stranger to SFA. For two weeks in 2005, he presented lectures at the university and attended a few classes his SFA colleagues taught.

“This experience changed my thinking and methods of teaching. The students and lectures really impressed me,” Csanyi said. “My stay at SFA was a milestone in my career. Since then, I have tried to use a combination of European and U.S. methods of teaching in my classes. I was positively surprised by the enthusiasm and interest of SFA students, and I wanted to have the same in my classes in Europe.”

“SFA students’ enthusiasm and interest is very similar to their colleagues' at universities in Bologna or Valencia. I expect lots of questions and long discussions,” Csanyi said. “The students will be the most important part of my work. I hope my work, experiences and European view on various topics will enrich my students.”

Additionally, Csanyi plans to make presentations in SFA’s School of Honors throughout the year.

Csanyi has a doctoral degree from Comenius University, one of the top universities in Central Europe. He lectures extensively across Europe and has received a number of grants. He is the editor of a journal and sits on the editorial boards of other journals. Prior to his academic career, Csanyi also played professional soccer for first and third league teams, including the top team in Slovakia, Spartak Trnava.

“I believe this is going to be very enriching because when you are in a new scenario, you are always open to new things,” Csanyi said. “I think it is going to be a great learning experience for me as well as SFA students.”