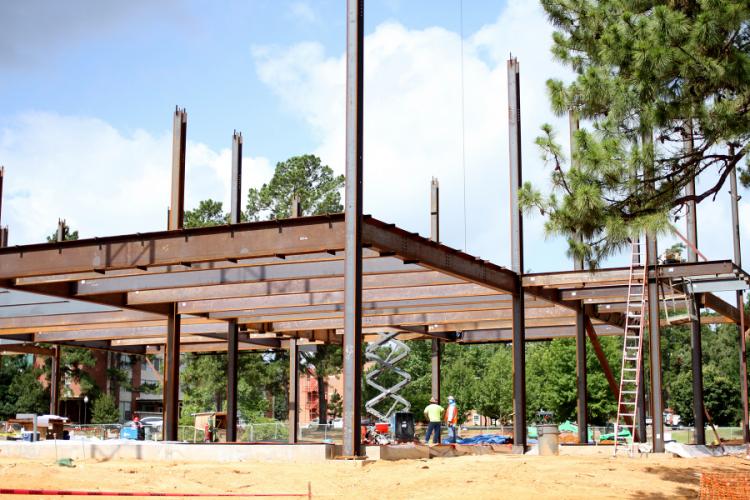 Structural steel beams are being placed this month as construction continues on the Ed and Gwen Cole STEM Building on the SFA campus. Officials said all projects are on schedule, and the building should be completed by fall 2018.


NACOGDOCHES, Texas — Structural steel beams are being placed and foundational concrete poured as construction of the Ed and Gwen Cole STEM Building remains on schedule to be completed by fall 2018 on the campus of Stephen F. Austin State University.

“The project began with the demolition of Todd and Gibbs Halls. The site then had selective tree clearing and grading to prepare for foundation construction,” said Ron Watson, associate director of SFA’s physical plant department. “First-floor concrete placement and the related under-slab plumbing and electrical rough-in continue.”

In response to a national call for reform in science, technology, engineering and mathematics education, SFA began years ago to implement activities, courses and public outreach initiatives that would enrich STEM-related interests. That same push for STEM reform was later incorporated into the SFA 2020 campus master plan.

As part of the university’s 2020 master plan, the SFA Board of Regents approved the demolition of Gibbs Hall, Todd Hall and University Woods in preparation for construction of the new building and relocation of the Residence Life Operations headquarters.

“We are still using the plan outlined during the building-programming phase,” said Dr. Dan Bruton, associate dean of SFA’s College of Sciences and Mathematics. “The Department of Computer Science and the Department of Physics, Engineering and Astronomy will be moving into the building, but there will be multipurpose spaces that will be used by other departments as well.”

Officials in the College of Sciences and Mathematics said they have already experienced a spike in interest from potential students.

“I've also had a student tell me that he is coming to SFA specifically because of the STEM building,” Bruton said. “Students are most excited to utilize makerspaces, the maker lab, the digital media lab, huddle spaces and the planetarium.”

The construction area was recently extended temporarily to install hot and chilled water lines. A small portion of sidewalk between the McGee Business Building and Norton H.P.E. Complex will remain closed to pedestrian traffic for approximately six weeks.

Videos and updates on construction can be found on the College of Sciences and Mathematics Facebook page: facebook.com/CollegeOfSciencesAndMathematics.