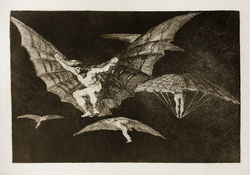 NACOGDOCHES, Texas - Works from private Nacogdoches art collections will be featured in an exhibition that opens Jan. 17 in Griffith Gallery on the Stephen F. Austin State University campus.

"The Collector Collects: Art from Private Nacogdoches Collections" draws from local collections and will feature a variety of mostly works on paper, such as prints, drawings and pastels, and includes artists ranging from Francisco Goya to Mark Tobey, according to John Handley, director of galleries for the SFA School of Art.

"Part of the fun in pulling together a show like this is to see the diversity of artists, styles, dates and mediums that can be found in a small regional area like Nacogdoches," Handley said. "There are examples from the 19th and 20th centuries, both European and American artists, many quite notable."

"I have been reminded several times from visitors to the galleries that these exhibitions were very popular," he said. "So we thought, why not do one again?"

The exhibition is sponsored in part by the SFA Friends of the Visual Arts and the Nacogdoches Junior Forum. A reception will be held from 6 to 7:30 p.m. Tuesday, Feb. 28, which is also the opening night of the SFA School of Theatre's production of Lynn Nottage's play "Intimate Apparel" as part of the school's Mainstage Series. The play opens at 7:30 p.m. in W.M. Turner Auditorium. Griffith Gallery is located across the hallway from the auditorium.

Admission to SFA art exhibitions and receptions is free.