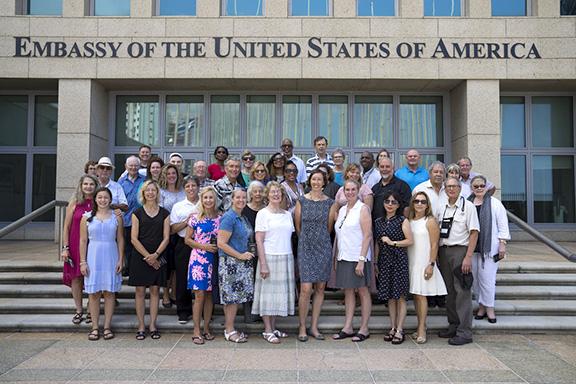 Drs. Barbara Qualls, assistant professor and leadership program coordinator at Stephen F. Austin State University, and Pauline Sampson, professor and coordinator of SFA’s superintendent certification program, traveled to Cuba to study its educational system and culture with a group through Educational Leaders Without Borders, an organization advocating universal education. During their trip, the group met with various educational leaders and visited sites such as the U.S. Embassy. Sampson is pictured on the first row, second from the left, and Qualls is pictured on the back row, second from the left.


NACOGDOCHES, Texas  — A recent trip to Cuba by two Stephen F. Austin State University faculty members in the Department of Secondary Education and Educational Leadership made it possible for them to study Cuba’s educational system and culture through Educational Leaders Without Borders, an organization advocating universal education.

Drs. Barbara Qualls, assistant professor and leadership program coordinator at SFA, and Pauline Sampson, professor and coordinator of SFA’s superintendent certification program, traveled with a group and met with various educational leaders in Cuba to discuss institutional differences between the two countries.

“The most striking difference I noticed between Cuban and American schools was that the Cuban educational system is highly centralized, while American schools value some level of local control,” Qualls said.

The group also met with a teacher union representative and learned how Cuban teachers are assigned to locations based on need, and campus leaders and principals are selected from the pool of teachers.

“Those who are involved with the Cuban educational system are very proud and somewhat defensive about it. Post-revolution, there has been much attention paid to public education and literacy, but it is likely that the accepted definition of ‘literacy’ in Cuba does not align with that of the U.S.,” Qualls said.

Sampson said she plans to utilize this abroad experience as a teaching tool in her SFA leadership courses.

“The way the community connects youth with support systems to keep them involved in their neighborhood in Cuba, especially in the area of fine arts, is something I plan to share with my students,” Sampson said. “There is a clear understanding that we are a global society and that decisions made by one country impact others.”

Qualls and Sampson also traveled to Puerto Rico where they presented research at the International Council of Professors of Educational Leadership 71st annual Summer Conference.