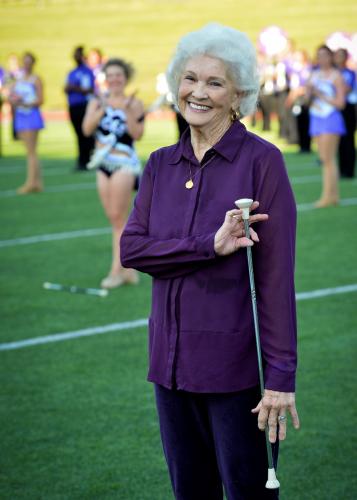 
NACOGDOCHES, Texas – With excitement and anticipation, Mary Jo Goodwin Morris made the five-hour drive from her home in New Braunfels to the campus of Stephen F. Austin State University.

The 87-year-old former SFA twirler had been invited to attend the Lumberjack Marching Band and Twirl-O-Jacks Reunion and to perform with an SFA alumni band in Homer Bryce Stadium prior to the kickoff of the football game between the SFA Lumberjacks and the University of Incarnate Word.

A number of Morris’ family members, including some of the seven siblings in her family, two of her four sons and several of her nieces and nephews, either graduated from or attended SFA. Her baby brother, the late Judge Gerald A. Goodwin of Lufkin, was an SFA graduate. So the memories she carried with her back to campus for the reunion represented “some of the happiest times of my life,” she said.

After graduating from Lufkin High School, Morris was a freshman at SFA in the fall of 1948 and made the twirling line that year and the following. She recalls wearing the “freshman cap,” living in Gibbs Hall, “doing a lot of crazy things” and riding around in roommate Doris Smith’s convertible.

The rivalry between what was then Sam Houston State Teachers College was strong even in those days, she said, recalling when a group of guys from Sam Houston “painted up campus,” were caught and sentenced to serving meals in the dormitories and leading SFA cheers outside the dorms.

“One who had attended SFA before going to Huntsville was put in a wooden and screened box and put on the train to ride back to Huntsville,” she said. “It was unbelievable.”

She was a member of the Pine Burrs (now Chi Omega), whose initiation attire remains vivid in her mind.

“We wore these old tow sacks that had pine cones all around them,” she said. “We had a clock hanging around our necks, wore pigtails with purple bows in our hair and no makeup, and wore one high heel and one low heel shoe. There was a photo of us in the annual.

“I loved SFA and had a wonderful two years there,” she said. “SFA was real special.”

Her college and twirling career was sidelined when she met Ferrell Morris of Pasadena while she was working during summers in the Houston area. The two married in the fall of 1950, and Mary Jo had a large wedding party, including her roommate from college and many of her twirling colleagues. Mary Jo and Ferrell had a long and happy life together and were blessed with four sons and a lifetime of adventurous careers and extensive travel, including a few years in the Middle East. Throughout the years, Morris has enjoyed working with children, often as a teacher and now as a “reading buddy” for students in the New Braunfels area and as a kindergarten Sunday School class teacher.

She stays active by working out at area gyms, including participating in water aerobics. She still mows her own lawn, and not with a riding lawnmower, she points out.

“My kids fuss at me for that,” she said, “but all I have to do is turn the key and follow it. As long as I can keep doing what I’m doing, I want to keep going as long as I can.”

Morris enjoyed reconnecting with her past at Saturday’s reunion. She said event organizers and representatives of the SFA Alumni Association “have been so precious to me.”

“They have reached out to me, and I feel so flattered,” she said, adding that she enjoyed meeting SFA President Dr. Baker Pattillo and sitting with him and his wife, Dr. Janice Pattillo, during the game. Prior to the weekend, she said she was looking forward to seeing old friends and making new ones.

“It’s exciting at my age to get this attention,” she said. “It’s flattering. They treated me like I was special, when I’m just another human being, just passing through this world.”