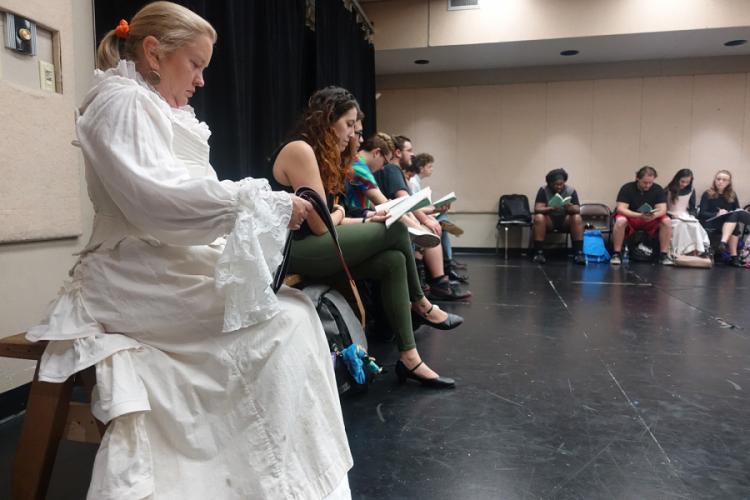 Retha Powers, in foreground, senior theatre major from Nacogdoches, wears a special rehearsal skirt and corset created for her to wear in preparation for the elaborate costume she will wear as Madame Pernelle in the School of Theatre’s production of Molière’s “Tartuffe.”

One of the funniest plays ever written, “Tartuffe” is both timeless and timely, according to Scott Shattuck, professor in the SFA School of Theatre and the play’s director.

“Because of its insights into human behavior and its broad look at the forces that shape society, its humor and satire are as fresh today as they were when the play was written in 1664,” Shattuck said. “At the same time, the play confronts questions that dominate current events in America today: How can we tell what’s real and what’s ‘fake?’ What is a social good and what’s bad? Why are some people taken in by fraud that seems obvious to others?”

The School of Theatre will present “Tartuffe” at 7:30 p.m. Tuesday through Saturday, Oct. 3 through 7, in W.M. Turner Auditorium on the SFA campus. Set in the 17th century, the play depicts a con man (the title character) who has successfully duped a wealthy businessman named Orgon. Because he is so impressed with Tartuffe’s pretensions of moral purity and religious piety, Orgon has invited Tartuffe to move into his lavish Paris home and take full advantage of his hospitality.

"Orgon’s family smells a rat, but when they urge caution, he takes offense and offers Tartuffe even more access to his property – and even to his daughter and his sensible wife, Elmire.” Shattuck explained. The wife lays a trap for the lecherous imposter, but not before her husband has been taken for all they’re worth.

Whenever the School of Theatre produces a great classical play such as “Romeo & Juliet” or “Tartuffe” or even a Greek tragedy, directors hope that audience members leave with a sense that “these wonderful literary art works aren’t dusty museum pieces,” Shattuck said.

Shattuck believes audiences will be “pleasantly surprised” by how vital and seemingly contemporary “Tartuffe” is and how funny, sexy and satirically relevant it is in 21st century America.

“Our production will feature beautiful and colorful baroque-era costumes with elaborate wigs, highly decorative scenery, and a quick-paced and energetic acting style from the appealing young performers,” he said. “And there is bawdy physical comedy that never goes out of style.”

Because Tartuffe is a 17th-century sex maniac as well as a greedy grifter, there will be some funny moments that aren’t appropriate for kids or those with “delicate sensibilities,” Shattuck said.

“Otherwise I think everyone will enjoy the show – some mostly for its witty language, some especially for the historical costumes, and many for the hilarious way the story unfolds,” he said. A content advisory may be viewed at www.theatre.sfasu.edu.